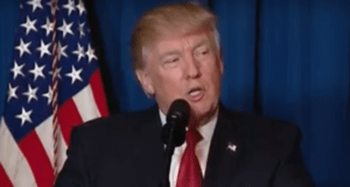 Here’s the problem: There is no evidence the Twitter feed belongs to someone named Nicole Mincey. And the account, according to experts, bears a lot of signs of a Russia-backed disinformation campaign.

On Sunday, Twitter suspended the Mincey account, known as @ProTrump45, after several other users revealed that it was probably a fake, created to amplify pro-Trump content.

The incident highlights Trump’s penchant for off-the-cuff tweeting – and the potential consequences for doing so now that he holds the nation’s highest office. Even as the president has railed against multiple investigations into Russia’s meddling in US politics, he may have become Exhibit A of the foreign government’s influence by elevating a suspected Russia-connected social media user – part a sophisticated campaign to exacerbate disputes in American politics and gain the attention of the most powerful tweeter in the world.

“The president doesn’t know whether it’s a Russian bot or not,” said Clint Watt, a former FBI agent and fellow at the Foreign Policy Research Institute, using the term for a fake Twitter account pretending to represent a real person and created to influence public opinion or promote a particular agenda. “He’s just pushing a narrative, whether it’s true or false. This provides a window, not just for Russia, but for any adversary to both influence the president or discredit him.”

As a candidate, Trump became known for amplifying tweets from accounts of dubious origin, including a user that went by the name @WhiteGenocideTM, and by disseminating anti-Semitic memes that bubbled up from some of the darkest corners of the Internet.

As president, not much has changed. Trump still routinely hits the retweet button if a Twitter user echoes his criticism of his adversaries or showers him with praise – regardless of who that user is or what their motives may be.

Aides and advisers have hinted that Trump has been urged to tone down his tweeting habits, but the president has shut down those conversations quickly, according to two people who have witnessed such exchanges. He has also on occasion followed bouts of public discourse about his Twitter feed with a rapid-fire tweet storm – perhaps an implicit signal that he has no intention of ceding control of his account to aides now that he is in the White House.

Trump’s tweet storms of the last several days, for instance, have followed intense speculation that his new chief of staff, John Kelly, might try to exert greater control over the president’s account. The message? That’s probably not going to happen.

During his six-month tenure, Trump’s former chief of staff, Reince Priebus, was unable to do much to rein in Trump’s social-media rants. Lawyers have tried and failed to impress upon the president the risks of discussing the ongoing investigation into Russian interference in the 2016 election and possible collusion of his campaign associates.

Kelly faces much the same challenge. According to people who have spoken with him, he does not believe that he will be able to change Trump’s social-media behaviour and believes that being seen as attempting to do so could pose risks, including damaging his relationship with the president.

While Trump continues to discredit the Russia investigation, bipartisan former national security officials and researchers say that the coordinated, state-backed efforts to spread disinformation during the 2016 campaign were very real.

“Nineteen to 20 per cent of the messages in the month before the election were originated by bots,” said Emilio Ferrara, a researcher at the University of Southern California, who conducted research on the impact of bots on the 2016 election. “About 400,000 accounts that posted tweets related to the political conversation we believe were bots.”

If anything, these accounts have found an even greater foothold since the election among Trump’s most ardent supporters online.

In the last week, a virtual army of accounts identified as having ties to a Russia-backed disinformation campaigns targeting the US political system zeroed in on efforts among Trump’s supporters to attack his national security adviser H.R. McMaster over the firing of two Trump loyalists from the National Security Council.

A tool created by a bipartisan group of national security experts and researchers to track Russian-backed propaganda accounts found that the “#fireMcMaster” hashtag became popular among these misinformation accounts at the same time that several influential, pro-Trump users on Twitter adopted the anti-McMaster position.

By Friday, the clamouring against McMaster had become so loud that Trump issued a public statement defending him.

“As a Republican it raises questions for some on the right who obviously have a difference of opinion on someone like General McMaster, but the reality is there is a foreign power here trying to push an agenda,” said Jamie Fly, a former adviser to Senator Marco Rubio, Florida, who helped create the Hamilton 68 project to track the influence of Russian-backed propaganda online.

Researchers say the fake accounts sometimes disseminate content from well-known Russian-backed sources including Sputnik or RT, which are then picked up by US conservatives. Or they might amplify content created by far-right media outlets known for misinformation as well, including Gateway Pundit or Infowars.

Fly said Trump’s liberal use of Twitter has only increased the return on investment for a foreign power such as Russia seeking to sow division within the US political system. Accounts can use Trump’s low bar for retweets to their advantage by creating large volumes of content in the hope that he might be drawn to some of it.

“His use of Twitter has elevated the platform,” Fly said. “It’s created a situation where it’s probably even more useful for a foreign power like Russia to try to influence the debate on Twitter.”

In the case of the account that was the recipient of an emphatic “Thank you Nicole!” from Trump on Saturday, Twitter will not say exactly why it was suspended. Online sleuths have posted evidence that the account has changed names several times, including as recently as this weekend. Experts say accounts such as this one often disappear quickly once they are exposed or achieve their objective. No one named Nicole Mincey has stepped forward to say the account is hers.

At one point, the account boasted as many at 150,000 followers, and, according to other Twitter users, was connected to similar accounts, which experts say suggests a network created to disseminate propaganda. These accounts are often set up as one-stop shops for pro-Trump, anti-Democratic Party memes. The accounts often use stock images doctored to display pro-Trump memorabilia.

The Trump administration has appeared resistant to addressing the growing problem of Russian online propaganda, which lawmakers and national security experts warn is a continuation of the tactics seen during the 2016 campaign.

Congress has appropriated $US80 million to combat Islamic State propaganda and Russian disinformation online, but the State Department has not yet used the money, prompting bipartisan condemnation from Senator Rob Portman, Ohio, and Senator Chris Murphy, Connecticut, the lawmakers who wrote the legislation establishing the fund.

“The challenge of Russia disinformation is not about Donald Trump, it’s much broader than that,” said Portman in a speech at the Atlantic Council late last month. “It was a serious problem before him, and it’s going to continue to be a problem long after his term in office.”