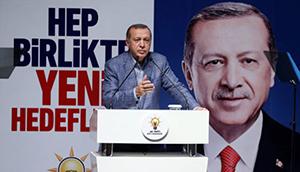 By TM
Turkish President Tayyip Erdoğan on Monday accused Germany of assisting terrorists by failing to respond to Turkey’s requests to hand over suspects wanted by Turkish authorities.

Speaking during a conference for ruling party members in northwest Rize province on Monday, Erdoğan said, “We gave [German Chancellor Angela] Merkel 4,500 dossiers [about suspects in Germany who are wanted in Turkey], but have not received an answer on a single one of them,” Reuters reported.
Claiming that Germany is abetting terrorists, Erdoğan said: “When there is a terrorist, they can tell us to give that person back. You won’t send the ones you have to us, but can ask us for yours. So you have a judiciary, but we don’t in Turkey?”
Turkey claims some key suspects in the perpetration of a failed coup in 2016 fled to Germany and is demanding that Berlin hand them over to the Turkish judiciary. German authorities have not responded to Ankara amid reports of torture in Turkish jails, especially in the case of coup suspects.
Ankara’s relations with Berlin became further strained after German journalists and a human rights activist were recently jailed on terror charges in Turkey.
The strained relations of the two countries resulted in the withdrawal of German troops from Turkey’s İncirlik Airbase after Turkey refused permission for German lawmakers to visit.