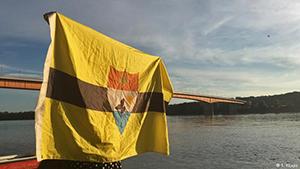 Many border disputes between former Yugoslavian constituent states remain unresolved, including along the Danube river between Serbia and Croatia. A Czech politician has proclaimed a new independent state there.

In a tiny tavern on the Danube, hidden beneath a bridge connecting Bezdan (Serbia) and Batina (Croatia), owner Pera, who is also known by his nickname “Parrot,” drinks beer with a friend while fish boils in a nearby pot. Pera’s hut belongs to both Serbia – because his business is registered there – and Croatia – because that is where it the property itself is registered. Two decades after the dissolution of Yugoslavia, Serbia and Croatia have still been unable to come to a final agreement as to where exactly their border on the Danube lies, and what belongs to whom.
Whereas Serbia claims the border runs down the center of the river, Croatia argues that the land registry dictates buildings and settlements on both banks officially belong to its territory. Therefore, Croatia says that a total of 10,000 square kilometers (3,900 square miles) of property in the Serbian municipalities of Apatin, Sombor and Backa Palanka belong to it, and that some 1,000 square kilometers on the far shore belong to Serbia.
Unsuccessful special commission
Similar border disputes exist between almost all of Yugoslavia’s successor states. In late June, the Permanent Court of Arbitration (PCA) in The Hague found that Croatia was obliged to establish a 2.5 nautical-mile-wide (4.6 kilometer) corridor in its territorial waters to ensure neighboring Slovenia access to international waters in the northeast Adriatic Sea. The Croatian government has decided to simply ignore the PCA’s decision.
A special commission consisting of representatives from both Serbia and Croatia has been struggling to resolve the “Danube conflict” since 2001. Yet, after nine meetings the commission has failed to come to an equitable solution. “Not least, the issue has allowed Croatia, which is an EU member state, to block Serbian accession to the EU,” as Aleksander Popov, project coordinator in Serbia’s Center for Regionalism, told DW. “Such issues provide a certain amount of blackmail potential, but states also use them to divert attention from their own domestic policy problems. That’s bad.”
‘Live and let live’
But one man has figured out how to use the Danube border dispute to his own advantage. Two years ago, Czech politician Vit Jedlika from the libertarian Free Citizens party noticed an unpopulated area along the Danube near the village of Zmajevac in the northeast of Croatia. In April 2015, he proclaimed the Free Republic of Liberland – a state that has yet to be officially recognized by any other country.
The peninsula upon which Jedlika proclaimed the “eighth successor state of Yugoslavia” has been designated a no man’s land because of the ongoing border dispute between Serbia and Croatia. Applications for Liberland citizenship can be filled out online – something that 500,000 people have already done. Liberland has a black and yellow national flag, a national anthem and a motto: “To live and let live.”
“Liberland is known around the world,” says Jedlika, “but it is a little more difficult when it comes to official recognition – there are many steps between de facto and de jure recognition. We have representatives in more than 80 countries right now.”
The aim is to create a kind of free economic zone, says Vladan Jovanovic, a Liberland representative who organized a boat trip through his new home for DW reporters. “People will be able to work here without all of the bureaucratic hassle. It will be something like the Silicon Valley or Hong Kong of Europe,” explains Jovanovic in a rather serious tone.
Nothing more than a joke
But the boat trip didn’t last long: The Croatian police prohibit access to the peninsula. When “founder” Vit Jedlika set out to survey “his” new home two years ago with a group of like-minded companions, police kept him from doing so. Both of the party’s boats were impounded and the “Liberlanders” were informed that next time they would not be returned – but scrapped.
Neither Serbia nor Croatia intends to recognize Jedlika’s new state: both countries view Liberland as nothing more than a joke. And both agree that no third country has the right to claim territory on their border.
That means that Liberland will one day be part of Serbia or Croatia – as the Danube border negotiations that stalled six years ago are set to resume. “We are confident that the two-party commission will resume its work after formal prerequisites are met. That mainly means the appointment of new commissioners and agreement as to the framework of bilateral talks regarding relations between the two countries,” reads a written statement provided to DW by the Croatian Ministry of Foreign Affairs.
Choosing the right rules
Aleksandar Popov of the Center for Regionalism thinks it would be best if Belgrade and Zagreb could come to an agreement on their own. Yet he cannot rule out the potential need for international legal arbitration in finding a solution. “Usually the rule is that a border runs right down the center of a navigable waterway, and that solution mirrors the desires of Serbia. But Croatia is an EU member state and thus has the potential to extort the situation,” says Popov.
Bar owner Pera tells us that anything is possible in the gray area beyond international politics: “If you can’t buy a piece of property in a village on the Croatian side of the river because you aren’t a Croatian citizen you can just sign a sales contract for it in Serbian Sombor, because its land registry is still responsible for the village. Sometimes we invoke Serbian rules, sometimes we invoke Croatian rules – it depends on which one fits the situation.”