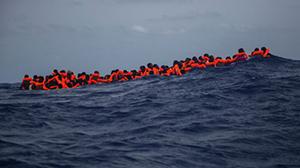 London: A Spanish aid group rescuing migrants in the Mediterranean say they have been threatened with being shot at by a Libyan coast guard ship.

And one of their boats is currently stranded in international waters, after being banned from two European ports.

The encounters are the latest in a dramatic heightening of tensions in the southern Mediterranean, where thousands of migrants are risking their lives putting to sea from Libya in overcrowded boast and dinghies. There they encounter a fleet of up to 12 aid group ships patrolling the sea to rescue them.

There have been 2405 migrant deaths in the Mediterranean this year, and 116,692 migrants have arrived in Italy by sea.

Proactiva Open Arms posted a video on Twitter of the Libyan ship firing two warning shots at close range, during the encounter which it said took place in international waters on Monday morning local time.

In an audio recording sent to Reuters, a man’s voice can be heard saying: “There is information that you are dealing with smugglers. Do not come back close to our waters. Next time you will be targeted.”

A Libyan coast guard spokesman told Reuters one of its patrol vessels had fired the shots into the air after finding the Spanish boat 12 miles (19 kilometres) from the Libyan coast, which he said was for Libya to patrol.

“We demanded they leave immediately and head north but they did not obey the instructions,” a Libyan coast guard spokesman Ayoub Qassem said.

It seemed they were waiting for an illegal migrant boat, he said.

“Our patrol vessel had to warn them and we fired twice in the air …[the NGO boat] vanished and left for the north with empty hands.”

Under Italy’s new code of conduct for NGOs conducting migrant rescues, which Proactiva has signed, there is an “absolute prohibition” for humanitarian ships to enter Libyan waters, unless “there is a clear danger to human life at sea”.

They are also not to hinder search and rescue (SAR) operations by the Libyan coast guard.

Another Proactiva rescue ship Golfo Azzura has been stuck at sea for more than two days with three rescued migrants on board, after being barred from European ports.

Proactiva’s founder Oscar Camps, who has twice met Pope Francis to talk about the migrant crisis, said on Twitter that “now neither Malta nor Italy allowed us to enter their ports to disembark the rescued people”.

He said his group’s actions had been “criminalised by unproven accusations… while [the migrants] die at sea”.

The Italian coast guard intercepted the ship as it was on its way to Pazzallo in Sicily, according to reports because they believed the boat had breached the code of conduct.

According to Maltese media, Maltese authorities are arguing that since the rescue took place closer to the Italian island of Lampedusa, that should be its destination.

They are making a stand as a matter of principle, because they fear becoming a major destination for rescued migrants.

Golfo Azzurro mission chief Albert Mayordomo said in a video they had been asked by Italy’s coast guard to look for the boat.

Italy has taken a more hardline stance on migrant rescues as the country gets closer to next year’s elections – and the Five Star party, which is ahead in the polls, has accused NGOs of providing a “sea taxi service” for migrants.

The European Union has provided funding and training for the Libyan coast guard, to extend patrols that intercept migrants before they leave Libyan waters.

On Tuesday Ghassan Salame, the United Nations special envoy for Libya, praised Italy’s support for the Libyan coast guard, saying “cooperation and transparency between Italy and Libya is the most constructive way [to get results],”

“Stronger Libyan authorities will make the common effort against traffickers in human beings more effective,” he said, according to Italian news agency ANSA.

The International Organisation for Migration (IOM), the UN’s migration agency, says there have been slightly (3.3 per cent) fewer migrants arriving by sea to Italy this year compared with 2016, and fewer deaths.