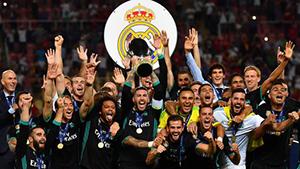 Manchester United were outclassed as Spanish and European champions Real Madrid retained the Uefa Super Cup with victory in a sweltering Skopje.

Madrid dominated from the start and led when Casemiro – who earlier hit the bar – slid in a half volley.
They doubled their lead when Isco calmly slotted in from eight yards after a neat one-two with Gareth Bale, who started ahead of Cristiano Ronaldo.
New £75m striker Romelu Lukaku tapped in before Marcus Rashford scuffed wide.
The Europa League winners were given encouragement by Lukaku’s strike, despite rarely threatening the Madrid goal in the previous hour, and could have scored a barely deserved equaliser through half-time substitute Rashford with nine minutes left.
United were unable to create another clear-cut chance as Madrid became the first team to retain the Super Cup since 1990.
With temperatures over 30C in the Macedonian capital, the match was twice stopped for scheduled cooling breaks implemented by governing body Uefa.
United still way behind Europe’s best
The Red Devils have spent £146m this summer on Everton striker Lukaku (£75m), Chelsea midfielder Nemanja Matic (£40m) and Benfica defender Victor Lindelof (£31m) as they look to improve on a disappointing sixth-placed finish in the Premier League last season.
All three new signings started as Mourinho named a strong side against the European champions.
Only Ronaldo was missing from the Madrid team which started their victory against Juventus in the Champions League final, providing a stern test for Mourinho’s new-look side.
But United struggled against the continent’s best, particularly in the first half, as Madrid controlled the tempo with their crisp and purposeful passing.

Cristiano Ronaldo came on for Karim Benzema after 83 minutes, almost adding a third when he headed wide from an injury-time corner
The English side were unable to effectively keep possession before half-time – managing just 39% of the ball – and mustered only one shot on target when Lukaku headed straight at Madrid keeper Keylor Navas.
Mourinho introduced teenager Rashford at the break, looking to stretch the Spanish club – who the Portuguese boss managed between 2010 and 2013 – on the break.
Although the Red Devils did improve in the second half, they still looked well short of being able to compete with Europe’s most talented sides going into their return to the Champions League this season.
Madrid continued to create chances throughout. Bale smashed against the bar when the score was 2-0, while David de Gea also produced superb saves to stop Toni Kroos, Karim Benzema and Marco Asensio.
Bale starts after Mourinho admits interest
On the eve of the match, United manager Mourinho said he will “fight with other coaches” to sign Bale if Madrid are willing to sell the Wales forward.
However, he added the former Tottenham winger starting for Madrid in Skopje would be “the clearest signal that he is staying there”.
Well, Bale started.
In truth it was always going to be likely as Ronaldo – who came on as a late substitute – only returned to full training at the weekend after being given an extended summer break following Portugal’s involvement in the Confederations Cup.
Bale insists he wants to stay at the Bernabeu, but struggled to make a major impact in an injury-hit campaign as Madrid won the Spanish La Liga title and Champions League last season.

Bale, 28, joined the Spanish giants for a then world record fee of £85m from Tottenham in 2013
The former Southampton player had a chance to prove his worth to Zinedine Zidane as he started up front alongside Karim Benzema.
He instinctively fired over early on, then set up Isco with a perfectly weighted pass before smashing a rising right-footed drive against the bar.
Bale, who was brought off after 75 minutes, will be pleased with his contribution in an impressive team performance.
However, if Madrid do sign exciting Monaco teenager Kylian Mbappe then it would appear Bale could become a peripheral figure at the Bernabeu.
After the game, Bale said he has not been told he can leave.
“I’m just concentrating on football and not listening to anything,” he said. “I’m enjoying myself playing here.”
Both teams feeling the heat

Mourinho used the cooling breaks to offer advice to his players
Competitive top-level European club games rarely include drink breaks, but they were implemented by Uefa in Skopje after temperatures remained over 30C during the match.
A heatwave nicknamed ‘Lucifer’ has hit southern Europe with temperatures in the Macedonian capital regularly rising above 40C this week.
The match paused twice – once at the 30-minute mark and again after 72 minutes – for both sets of players to rehydrate.
Both managers used the pair of two-minute breaks to gather their players around and issue some tactical instructions.
Bale said he felt his team coped well with the heat, adding: “It helped we have been training in 38C heat in Madrid.”
Post-match reaction
Manchester United manager Jose Mourinho:
“I think we did well. We lost 2-1 which, I think, shows the result was really short, and one of the goals was offside so with a good VAR it would be 1-1 and extra time.
“I think they could score more goals than they did, we could score more goals than we did. They had a period of dominance in the middle of the first half, we had a period of dominance in the middle of the second half and some balance in the beginning of the game.
“We were playing against a team of fantastic players and we discussed the result until almost the end, not the end but almost the end.”
Man of the match – Isco (Real Madrid)

Isco continued his fine form from last season, impressing throughout as he caused problems for United with his movement, sharp touches and driving runs
United cannot stop the Super Spanish
• Spanish teams have won eight of the last nine European Super Cups
• Only Barcelona and AC Milan (five) have won the European Super Cup on more occasions than Real (four)
• Jose Mourinho has never beaten Real Madrid in a competitive match, drawing one and losing four of five matches
• Mourinho is the first manager to lose three European Super Cup matches as a manager, following defeats in 2013 with Chelsea and in 2003 with FC Porto
• The last Europa League winner to claim the Super Cup was Atletico Madrid in 2012, as they beat Champions League winners Chelsea 4-1
What’s next?
United, who finished 24 points adrift of champions Chelsea last season, start the new Premier League campaign when they host West Ham United at Old Trafford on Sunday (16:00 BST).
Madrid face arch-rivals Barcelona at the Nou Camp on Sunday, when the sides meet in the first leg of the Spanish Super Cup (21:00 BST).