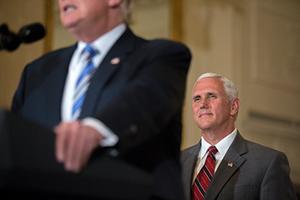 Frank Bruni
The other day, from the Naval Observatory in Washington, you heard a howl of such volume and anguish that it cracked mirrors and sent small forest animals scurrying for cover. Vice President Mike Pence was furious. He was offended. Someone — namely, my Times colleagues Jonathan Martin and Alexander Burns — had dared to call him out on the fact that he seemed to be laying the groundwork for a presidential bid.

Problem No. 1: His president is still in the first year of his first term. Problem No. 2: That president is Donald Trump, who doesn’t take kindly to any glimmer that people in his employ are putting their vanity or agenda before his. Just ask Steve Bannon. Or Anthony Scaramucci. They were too big for their britches, and Trump snatched their britches away.
The Times report put Pence in similar peril, so he pushed back with an operatic outrage that showed just how close to the bone it had cut. When a story’s actually wrong, you eviscerate it, exposing its erroneous assertions without ever breaking a sweat. When it’s a stink bomb at odds with your plotting, you set your jaw, redden your face and proclaim it “disgraceful,” never detailing precisely how.
That was Pence’s route. And his rancor, I suspect, reflects more than the inconvenient truths that Martin and Burns told. It’s overarching. It’s existential. On some level, he must realize that he’s in a no-win situation. Without Trump he’s nothing. With Trump he’s on a runaway train that he can’t steer or brake. If it doesn’t crash, Trump can scream down the tracks straight through 2020. If it does, Pence will be one of the casualties.
So why has Pence formed a political action committee, the only sitting vice president ever to do so? Why is he taking all these meetings, building all these bridges? I guess there could be some imaginable future in which Trump falls and Pence is left standing strong enough to soldier on. But mostly he’s in denial, and he’s living very dangerously.
Many Republicans wonder if Trump will remain in the picture and viable in 2020. He could implode — even more than he already has, I mean. He could be run out of town, one way or another. He could stomp off. The scenarios are myriad, and to prepare for them, Pence indeed needs an infrastructure and a network of his own. But there’s simply no way to assemble those without looking disloyal to Trump and courting the wrath of alt-right types who know how to go on a Twitter jihad.
Other would-be successors to Trump aren’t in the same bind. They don’t owe Trump what Pence does. They never pledged Trump complete allegiance. Gov. John Kasich of Ohio, whose unofficial 2020 campaign commenced even before Trump’s inauguration, can raise money, stage news conferences, take up residence on CNN and pick apart Trump’s proposals all he wants. It won’t endear him to Trump’s base, but it won’t make him a marked man.
Senator Ben Sasse of Nebraska can style himself as a humble, homespun remedy to Trump’s cupidity and histrionics. Senator Tom Cotton of Arkansas can take a calibrated approach, more hawkish than Trump on foreign policy but eager to link arms with him on immigration.
Pence, though, is squeezed tight into a corner of compulsory worship. And despite his behind-the-scenes machinations, he has done a masterful job of appearing perfectly content there.
In news photographs and video, you catch other politicians glancing at the president in obvious bafflement. Not Pence. Never Pence. He moons. He beams. It’s 50 shades of infatuation. Daniel Day-Lewis couldn’t muster a more mesmerizing performance, and it’s an unusually florid surrender of principles.
I’m not referring to policy and the fact that before he agreed to become Trump’s running mate, he blasted Trump’s proposed Muslim ban, tweeting that it was “offensive and unconstitutional,” and fiercely advocated free trade. I’m referring to Pence’s supposed morality.
He trumpets his conservative Christianity and avoids supping alone with any woman other than his wife, then turns around and steadfastly enables an avowed groper with a bulging record of profanely sexual comments.
He publishes a testimonial, “Confessions of a Negative Campaigner,” in which he invokes Jesus while vowing never to repeat such political ugliness in the future, then turns around and collaborates with a politician whose ugliness knows no limit.
No wonder he wants and expects a reward as lavish as the White House itself: He sold his soul. But I don’t think he studied the contract closely enough and thought the whole thing through.
There’s no political afterlife in this equation, just the loopy, mortifying limbo in which he and so many of Trump’s other acolytes dwell.
Maybe the howling is cathartic. Won’t change a thing.