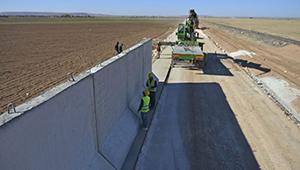 Turkey has begun construction of a 144-kilometer-long wall along its border with Iran in order to stop illegal crossings.
A Habertürk daily report said on Tuesday the wall will mainly aim to boost security by halting the infiltration of Kurdish militants and illegal smugglers.
On Tuesday the governor of Ağrı province, Süleyman Elban, inspected the construction of the wall, a two-meter wide, three-meter high barrier with portable blocks. The first phase of the wall construction will be completed by October of this year.
President Recep Tayyip Erdoğan announced in January that Turkey plans to build walls along its borders with Iraq and Iran, similar to the one currently being erected along its 911-kilometer (566 mile) frontier with Syria.