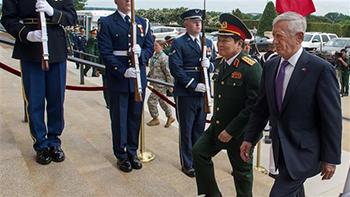 Vietnam and the United States have agreed to forge deeper military ties, and an American aircraft carrier has been scheduled to visit the southeast Asian country amid a territorial dispute between Vietnam and China.
During a Tuesday meeting in Washington, Vietnamese Defense Minister Ngo Xuan Lich and his American counterpart James Mattis agreed that a strong military relationship between the two countries would serve their common interests, including freedom of navigation in the South China Sea.

The two top military officials further agreed on a visit by a US aircraft carrier to Vietnam next year, the first such visit since the end of the Vietnam War in 1975.
US President Donald Trump had discussed the possibility of the warship’s visit to Vietnam with the Asian country’s Prime Minister Nguyen Xuan Phuc when they met at the White House back in May.
“The Secretary welcomed Vietnam’s engagement and growing leadership in the Asia-Pacific region,” read a statement issued by the US Defense Department after the meeting between the two defense ministers.
Pointing to the agreement, Vietnamese government consultant Ha Hoang Hop said it was consistent with Hanoi’s diplomatic strategy of being open to all countries.
“Vietnam is not willing to compromise on issues of sovereignty and also makes its own preparations,” he said.
Vietnam is involved in a territorial dispute in the South China Sea with regional power China. Tensions have further climbed since June, when Vietnam started drilling for oil and gas in an offshore block that Beijing disputes. The exploration was suspended following diplomatic protests from China but the broader dispute lingers.
China was also angered by Vietnam’s position at an Association of South East Asian Nations (ASEAN) meeting last weekend, when it held out for language in a communiqué that pointed to concerns about Chinese island-building and militarization in the South China Sea.
The US, an extra-regional country, has been taking the side of China’s rival claimants in the regional disputes, which also involve the Philippines, Taiwan, Brunei, and Malaysia.