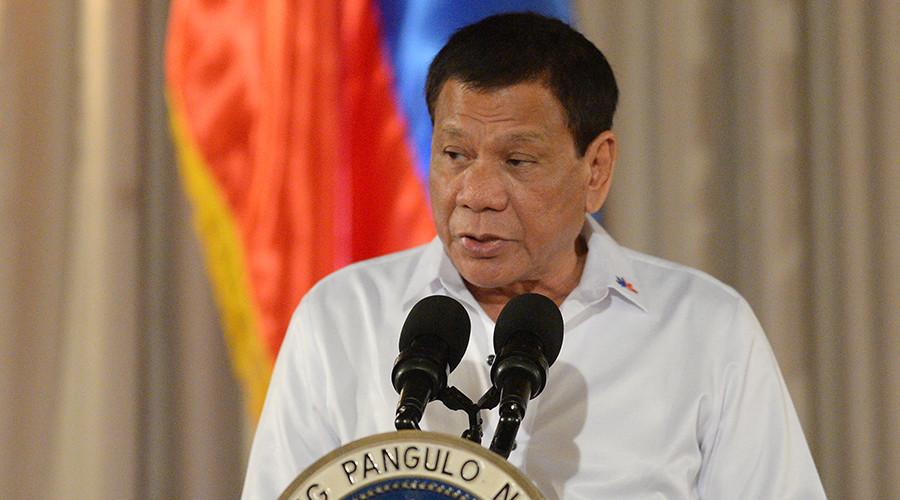 Philippine President Rodrigo Duterte has threatened to unleash the full might of the military against the private militias of corrupt politicians, including sending in fighter jets to bomb their positions.
The president was giving a speech in which he revealed he had expanded the list of politicians suspected to be involved in the drugs trade.

“Even if you have 100-200 armed men, that will not help,” he said, as quoted by the Manila Bulletin on Tuesday. “Why would you put up a fight? I have 12 FA-50 jets. I will drop five bombs on you. I will really use the force of the government.”
“I told you not to contradict the government. I will use the government because I have to protect the people who represent the government. I will not hesitate.”
Private armies led by politicians and powerful clans have long been a fixture in the Philippines, particularly in the southern island of Mindanao, wracked by conflict with communist and Muslim insurgents as well as the terrorist group, Abu Sayyaf, linked to Islamic State (IS, ISIS/ISIL).
Other than providing security, the militias are known to be used for settling scores: in November 2009, gunmen loyal to the powerful Ampatuan family massacred 57 people in the province of Maguindanao. Duterte himself has been accused of leading an armed group dubbed the “Davao Death Squad” prior to his election as president, which allegedly carried out the killings of thousands of accused drug dealers, users, thieves and other petty criminals. Some of the alleged former members of the squad have testified in court, either providing descriptions of the alleged extrajudicial killings, or dismissing the very existence of the group as “media hype.”
Duterte’s latest warning comes just over a week after Reynaldo Parojinog, mayor of Ozamiz City, was shot dead along with 13 others, including his wife and his brother, when a shootout erupted during an anti-drugs operation. Parojinog had been on Duterte’s “list” since 2016, and Duterte denounced him and his family as “gangsters.”
Allegations of using the war on drugs as a method of getting political opponents out of the way have also surfaced locally.
“I am the president of the barangay [village] council,” Vicente Yungco Jr told Marina Kosareva for RT’s documentary Project Duterte. “I was really surprised that I was linked with drugs. I’m on bail now, amounting to 80,000 pesos [$1,600] for illegal firearms and ammunition.”
“I think it was a political motivation. I have a political rival in my barangay. We were elected for three terms, they did not win. I’m afraid that certain local officials, they can do whatever they want.”
Over 7,000 people have been killed in the police crackdown on drug dealers since the start of Duterte’s presidency in July 2016, according to data from the Philippine National Police (PNP). The Philippines authorities have claimed that a large portion of those deaths have come from suspects resisting arrest in police operations while others have come at the hands of vigilantes or rival crime syndicates working outside the law. Meanwhile, human rights groups allege there is an unofficial state-sanctioned policy of exterminating drug suspects, while police officers actively collude with the vigilantes.