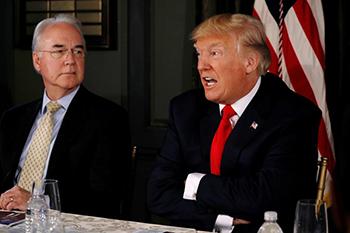 If you want to know why you should be concerned that the United States could blunder into an ill-conceived war on the Korean peninsula, consider three statements:
“We’ll handle North Korea. We’ll be able to handle North Korea. It will be handled. We handle everything.” (Donald Trump, July 31)

“The president’s been very clear about it. He said he’s not gonna tolerate North Korea being able to threaten the United States. If they have nuclear weapons that can threaten the United States, it’s intolerable from the president’s perspective. So of course, we have to provide all options to do that. And that includes a military option.” (Lieutenant General H. R. McMaster, August 5)
“North Korea best not make any more threats to the United States. They will be met with fire and fury like the world has never seen.” (Donald Trump, August 8)
Secretary of State Rex Tillerson’s plaintive words about the United States not being North Korea’s enemy (August 1), or his reassurance that the military option has not drawn closer (August 9), do not count much, partly because he does not count much in American foreign policy these days, and partly because in this administration above all, only the president counts. They do, however, confuse the message of an already chaotic administration.
The first statement reflects Trump’s blustery confidence that any problem can succumb to his smarts—a view not chastened by six months of domestic legislative failure. The second statement confirms the view that the administration has defined North Korean possession of nuclear weapons that can reach the United States—and not evidence of their impending use—as intolerable. In the same interview McMaster spoke of “preventive war”—a calculated, premeditated assault, which is importantly different from preemption, a strike to thwart an impending attack. The third statement confirms that it is not action but the mere threats of North Korea’s leader that could trigger war.
Maybe it is all bluff. If it is, Trump will inflict a dangerous wound to American foreign policy, for his threats will probably be shown to be hollow. If loose words about fire and fury are a mere negotiating tactic, they will not deliver what the United States desires, because the North Koreans have every reason to want nuclear weapons, and have shown an impressive unwillingness to yield to pressure, even from their main ally and trading partner China, in acquiring them. If it is not a ploy, however, the administration is probably considering when to launch the Second Korean War. And that bears reflection.
North Korea with nuclear weapons is a scary reality—scarier in a number of ways than Soviet or Chinese possession of nuclear weapons were in the 1950s and 1960s. Pyongyang has already proven itself a wanton proliferator of nuclear technology; it has engaged in murderous attacks on South Korea, to include assassinations and a surprise attack that sank a South Korean warship; it is psychologically as well as politically isolated, and hence prone to miscalculation. The Pentagon may have a military option that could obliterate North Korea’s nuclear capacity at a stroke; that could do on a much larger scale what the Israelis did to the Iraqi Osirak nuclear reactor in 1981 and the North Korean nuclear reactor in Syria in 2007. It is even conceivable, though much less likely, that such a blow would bring down the regime, or at least cause it to go into fetal position rather than unleash retaliatory strikes that would hit South Korea, Japan, or American bases. Maybe.
It is equally conceivable, and more likely, however, that the outcome could be a ferocious war that would lead to the overthrow of the North Korean regime, but could kill hundreds of thousands, or even millions, of America’s Asian allies, and thousands of American troops and their numerous dependents. The South Korean capital, Seoul, is within range of massed North Korean artillery pieces in their thousands, and North Korea has chemical as well as conventional weapons. It might even be able to detonate some nuclear weapons, although it is much more doubtful that it could deliver them.