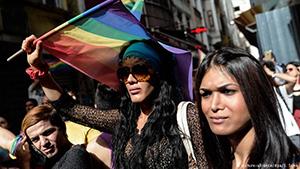 Two LGBTQ-rights organizations have filed a lawsuit against the US president over his proposed ban on transgender military personnel. Trump announced the ban on Twitter, seemingly without consulting the Pentagon.

The lawsuit, which was filed on Wednesday on behalf of five transgender military personnel, who together boast nearly 60 years of military experience, argued that President Donald Trump’s proposed ban was unconstitutional and denied transgender service members equal protection and due process.
The lawsuit was filed in the US District Court in Washington DC by GLBTQ Legal Advocates & Defenders (GLAD) and the National Center for Lesbian Rights (NCLR).
“The damage is happening now,” said Jennifer Levi, Director of the Transgender Rights Project at GLAD. “These service members were told in June 2016 they could come out and continue to openly serve.”
“Trump’s directive to exclude transgender people from military service has created a tidal wave of harms that have already been felt throughout our armed services,” said NCLR legal director Shannon Minter. “Transgender service members have been blindsided by this shift and are scrambling to deal with what it means for their futures and their families.”
Lawyers handling the lawsuit against Trump said they hoped that, given the uncertainties facing transgender service members, the court would move swiftly to stop the ban from taking effect.
Also named in the lawsuit along with Trump were Chairman of the Joint Chiefs of Staff General Joseph Dunford and Defense Secretary Jim Mattis. Dunford had said in a memo that there would be no change in policy before Mattis had received a formal order from the president. That order had yet to be issued.
The White House refused to comment on the lawsuit, saying it does not respond to pending litigation.
Supposed ‘tremendous’ medical costs
Trump announced last month his intention to ban openly transgender people from serving in the US military through a series of tweets. The government “will not accept or allow transgender individuals to serve in any capacity in the U.S. military,” he said, adding that their service entailed “tremendous medical costs and disruption.”
Trump’s announcement appeared to come on the back of little or no consultation with the Pentagon, which at the time referred all questions to the White House. The decision was also taken while Mattis was on vacation. The affected departments were left scrambling to devise an appropriate and coherent response to the ban.
The Pentagon said it would not act on the president’s tweets until the White House provided more formal directives on how to proceed.
Left in Limbo
While the five plaintiffs were not identified in the lawsuit, it was disclosed that three of them served as US Army soldiers, one served in the Air Force and the other in the Coast Guard. Their military experienced ranged from three years to two decades, and included tours in Iraq and Afghanistan. All five were previously men who had transitioned to associating as female.
While the policy attracted plaudits in conservative circles, it raised doubts around the livelihoods and post-service retirement benefits for thousands of transgender service members, many of whom only came out when the Pentagon last summer allowed openly transgender people to serve in the US military.
It means that, in effect, transgender service members who were encouraged to come under one administration could risk being expelled altogether under another.
This isn’t the only lawsuit the president could be facing over the ban. The American Civil Liberties Union said it had informed the White House of its intentions to sue and requested that the relevant document be preserved in preparation for the lawsuit.