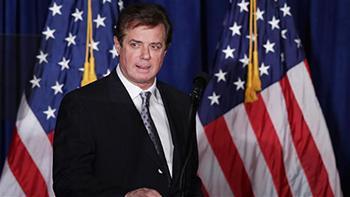 The US Federal Bureau of Investigation has raided the home of Paul Manafort, President Donald Trump’s former campaign manager, as part of an ongoing investigation into Russia’s alleged intervention in the 2016 US presidential vote.
“FBI agents executed a search warrant at one of Mr. Manafort’s residences. Mr. Manafort has consistently cooperated with law enforcement and other serious inquiries and did so on this occasion as well,” Jason Maloni, a spokesman for Manafort, told CNN on Wednesday without shedding more details.

The so-called no-knock raid took place at Manafort’s home in Washington’s northern Virginia suburbs on July 26, a day after he met with Senate intelligence committee investigators. He was supposed to appear before the Senate Judiciary Committee on the same day.
One source familiar with the investigation told CNN that the FBI agents had seized some of Manafort’s financial and tax records.
This is while Manafort had voluntarily turned over hundreds of pages of documents, including some of the data gathered in the FBI operation, the source noted.
The surprise raid, which appeared to be unusual in a case that has been going on for months, is part of a high-profile probe led by Justice Department Special Counsel Robert Mueller.
Mueller and his team of over three dozen lawyers have been investigating Trump’s associates to see if they had ties to Russia during the campaign.
Manafort, who was hired March last year to help Trump’s team through the primary run, took over as the manager in June, after the firing of original campaign boss Corey Lewandowski.
He is seen by many as the major force behind the selection of Vice President Mike Pence, as Trump’s running mate.
As a highly paid foreign political consultant, Manafort faces growing pressure from Mueller to cooperate with the probe.
Manafort’s allies say Mueller is trying to build a case against Manafort unrelated to the 2016 campaign, hoping that he would provide information against others in Trump’s inner circle in exchange for lessening his legal exposure.
Last week, the Trump campaign turned over more than 20,000 pages of documents to congressional investigators.