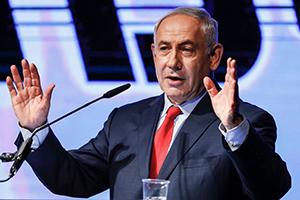 By David Wainer
Israeli Prime Minister Benjamin Netanyahu, facing mounting legal troubles that could force him from office, gave a defiant speech to thousands of supporters in which he accused “left-wing” Israeli media of trying to topple his government through a campaign aimed at pressuring the attorney general to indict him.

Echoing U.S. President Donald Trump, Netanyahu accused the media establishment of purveying “fake news” to topple a right-wing government. After months of questioning witnesses in at least four separate cases, Israeli police this month signed a plea bargain with Netanyahu’s former chief of staff, Ari Harow, who will now aid the probes. For months, Israeli television channels and newspapers have been publishing revelations regarding the probes into Netanyahu’s alleged wrongdoing, and predicting his downfall.
“Their purpose is a governmental coup,” Netanyahu said to thousands of supporters of his Likud Party in Tel Aviv. “Their goal is to apply unrelenting pressure on law enforcement agents so that they’ll serve an indictment at all costs, without taking into account the truth or justice.”
Netanyahu, Israel’s longest-serving prime minister after founding father David Ben-Gurion, would likely face intense pressure to resign — although he wouldn’t be obligated to — if the attorney general eventually decides to indict him. In his most extensive comments to date on the investigations, Netanyahu sought to steer the debate away from whether he’s committed unlawful acts to one about right versus left, arguing that his opponents would let up if only he would agree to cede territories to the Palestinians.
He ended his speech with what has become his trademark retort to the accusations against him: “There will be nothing, because there is nothing.”
If Netanyahu is forced to resign, new elections could be declared, with polls showing Yair Lapid of the opposition Yesh Atid party and Finance Minister Moshe Kahlon of the Kulanu party as top contenders to replace him, along with new Labor Party leader Avi Gabbay. But some politicians have said that he shouldn’t necessarily step down even if he’s indicted. Much will depend on whether Netanyahu’s popularity, which has thus far stayed relatively intact, begins to ebb.