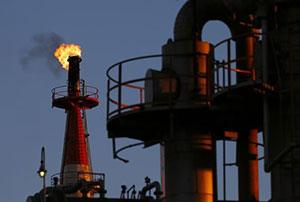 Aaron Sheldrick
TOKYO (Reuters) – Oil futures inched down on Thursday despite official figures showing U.S. crude inventories fell more than expected, with an analyst saying the market had settled into a range.

“We have settled into a range. The U.S. dollar is slightly stronger, which may be creating a bit of negativity, but broadly I think the market is trading sideways at the moment,” said Ric Spooner, chief market analyst at CMC Markets in Sydney.

“It does create the hope that we are going to end the summer driving season with inventories below the year before, which would be a positive development,” Spooner said.

Refiners processed nearly 17.6 million barrels of crude, surpassing a record set in May and the most for any week since the U.S. Department of Energy started keeping data in 1982.

But a surprise increase in gasoline stocks is capping gains in oil prices and tempering attempts by the Organization of the Petroleum Exporting Countries (OPEC), Russia and other producers to boost prices that are about half of levels three years ago.

They are cutting output by about 1.8 million barrels per day (bpd) under an agreement set to run until March 2018.

The deal has supported prices but a recovery in output in Libya and Nigeria, OPEC members exempt from the cut, has also complicated the initiative.

Armenian and Russian foreign ministers to meet in Moscow December 7