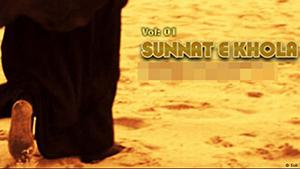 It shouldn’t be a surprise that the Pakistani Taliban’s initiative to publish a women’s magazine seems counterintuitive, at least on the surface.
The outfit has garnered a significant amount of disgrace over the years for all the atrocities it committed against girls and women, including barring them from education and curbing their access to the public sphere.
DW recommends
Last week, though, the extremist group released the first edition of its new English-language magazine targeted at a female readership.
The first edition of “Sunnat E Khaula” – which translates as ‘The Way of Khaula’ referring to a 7th-century female Muslim warrior and follower of the Prophet Muhammad – published by the Tehreek-e-Taliban Pakistan (TTP) features a picture of a woman veiled from head to toe on its front cover.
Published inside is an interview with the wife of the TPP leader, Fazlullah Khorasani, in which she talks about getting married to him at the age of 14. The wife, whose name is not revealed in the interview, came out in support of underage marriage.
The opening editorial of the magazine makes it clear that the initiative’s main intention is to entice women to join the group’s ranks. “We want to provoke women of Islam to come forward and join the ranks of mujahedeen (holy warriors of) Islam,” it reads. The publication also has an advice column for would-be female jihadists.
Another article published in the first edition concerns a Pakistani female doctor describing her decision to shun her western education and embrace Islam, titled “My journey from ignorance to guidance.”
Wooing educated women
“The English language magazine is proof that a retrogressive organization like the Taliban is also giving importance to social media,” said Saad Muhammad, a retired brigadier and security analyst, who is based in the country’s volatile northwestern region.
“With the magazine, they are trying to reach the women belonging to the middle and upper-middle classes, the ones that can read English,” he told DW.
This view is shared by Usman Qazi, an Islamabad-based rights activist. “Perhaps the Taliban want to target women from the Pakistani diaspora for recruitment or financial resource mobilization,” Qazi told DW. “Frankly, I am flabbergasted by this initiative,” he added.
Observers say the magazine may also be an effort at “window dressing” the Taliban as “Anglophone political workers.”
The Taliban have traditionally relied on Muslim imams who are graduates of seminaries sympathetic to their cause to spread their word, says Hurmat Ali Shah, a Pakistani activist from Swat, an area that was under Taliban occupation until early 2010.
“In areas where the state’s writ is lax or the state looks the other way, the Taliban send their speakers regularly to address people after Friday prayers. But this is now complemented by unorthodox methods,” Shah told DW.
After seeing the effectiveness of online propaganda perfected by the so-called “Islamic State” (IS) terror group, the Taliban too are under heavy pressure to take to the Internet and other unconventional platforms to reach out to potential sympathizers, the expert underlined.
Unusual publicity
The Taliban have earned disrepute over the years for obstructing female empowerment in the name of Islam and launching brutal attacks on those who don’t follow its extremist line and obey its diktats.
The most well-known example of the group’s viciousness is that of Pakistani campaigner and Nobel Peace Prize laureate Malala Yousafzai, who was shot and wounded by the Taliban for her efforts to promote girls’ education. Furthermore, they have regularly carried out beheadings, political assassinations and kidnappings, among other crimes.
Yet, the Taliban believe there is space for enticing women into the folds of Jihad, said activist Hurmat Ali Shah.
“Attracting women to the cause can be effective,” Shan noted, adding that women tend to influence their family members to take up arms as well.
This is not the first time the Taliban have launched a magazine. In the past, when they wielded considerably more influence in Pakistan, the outfit regularly published in both Urdu and English, hoping to attract new recruits. It was also active on Facebook and Twitter, but most of its social media pages have now been closed.
Pakistan’s military began an offensive against extremist groups in the country’s northwest in late 2014 after the Taliban attacked a military-run school killing over 150 people, most of them children.
Security has since improved, though the Taliban continues to sporadically launch attacks, including one last month on a market in Lahore that killed 26 people. “This new magazine could be an attempt by these Islamists to mitigate the impact of the loss that the army has inflicted upon them,” argued security analyst Saad Muhammad.