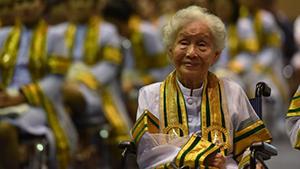 A 91-year-old woman from Thailand who says it’s “never too late to study” has completed her bachelor’s degree after more than 10 years of work. She spoke to Watchiranont Thongtep of the BBC’s Thai service.

Kimlan Jinakul had always wanted to go to university but as a young girl simply did not have the opportunity.
But almost a lifetime later and after seeing most of her own children through university, she decided to enrol and on Wednesday finally picked up her degree.
Kimlan originally comes from the Lampang province in the north of Thailand. She was a smart pupil and went to one of the best schools in her province.
But moving on to university was not an option at the time, and after her family moved to Bangkok she got married and had to abandon her dream to study further.
“I have always, though, wanted my children to be able to study. So I encouraged and supported them when they wanted to to go to university.”
Four of her five children got a masters degree and one even went on to receive a PhD in the US.
And it was her kids’ academic experience that eventually led her to get enrolled herself.
When one of her daughters – who was already working at a hospital – took a course at Sukhothai Thammathirat Open University, Kimlan decided to get on board as well.
She was 72 when she first enrolled, but the death of one of her daughters meant that she dropped her course for a few years.
When she was 85, she went back for a second shot and enrolled for a degree in Human Ecology – a programme that she said would teach her how to live a good and happy life.
“After recovering from the loss and sadness, I pushed myself to finish this programme. I’m hoping my daughter’s soul would be pleased to see this,” she told the BBC.
During her years of studying, her daily routine was to rise early and give alms to Buddhist monks, then visit a temple in the neighbourhood and eventually sit down and study.
“It’s never too late. My mind is always awake and sharp for learning,” Kimlan said.
“This world never stops. There are always new problems for us to solve. If there were no new sciences, the world would stop prospering,” she said.
Formula for success
Asked about the secret to success, she said it was determination and ambition that got her that far.
“When I told myself to finish one chapter, I would try my best to do so. I underlined all the key points I needed to memorise. And that’s what helped me during my study reviews.
“I was glad when I passed and sad when I failed. So I re-took the exam until I passed,” she laughed.
So what’s the plan now that she’s got her degree?
“I don’t think anybody would employ me if I were to look for a job,” she jokes.
“I will just continue to look after my grandchildren.”