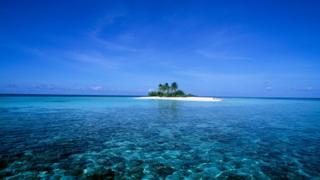 Justin Rowlatt -South Asia correspondent
Are you dreaming of a holiday in the Maldives?

You may want to choose another fantasy destination after the British Foreign Office told tourists to be aware that some political demonstrations in the capital, Male, have led to violence. It did add, though, that most trips there are trouble-free.
At the end of last month the Maldives celebrated its birthday, 52 years since independence from Britain.
But the festivities were marred when the government ordered troops to storm the country’s parliament and prevent opposition MPs from entering.
It was the latest dramatic attempt by President Abdulla Yameen to maintain his grip on power, and the latest twist in a tale of tropical intrigue worthy of a thriller.
The story is certainly set against a suitably exotic backdrop.
The Maldives is justifiably famous for its breathtakingly beautiful beaches and breathtakingly expensive luxury hotels.
But while the water of the coral reefs that surround them may be crystal clear, politics in the so-called “island paradise” has always been very murky indeed.
The political drama is centred, not on the beaches but on Male, the tiny, urbanised island where all of the Maldives’ major institutions are based and which is one of the most densely populated cities on Earth.
For 30 years the country was a corrupt autocracy, ruled with the proverbial “iron fist” by Maumoon Abdul Gayoom.
President Gayoom shrugged off numerous coup attempts during his three decades in power, but the wily tactician could not resist forever the growing demand for democratic reform.
In 2008, a charismatic young progressive, Mohamed Nasheed, swept to power in the country’s first democratic elections.
He rolled back repressive laws, bolstered democratic institutions and captured the world’s attention with an underwater cabinet meeting to highlight the risks of rising sea levels.
But the Maldives’ brief moment as a model Islamic democracy was not to last.
Less than four years later, Mr Nasheed resigned following a mutiny by the police and weeks of demonstrations after the arrest of the chief justice, something he now calls a coup.
In November 2013, Mr Yameen took office, but as he is Mr Gayoom’s half-brother, it looked like a return to the old order.
However, over the last year the two strongmen have had a spectacular falling out.
So much so that Mr Gayoom, the grizzled old dictator, has thrown in his lot with the dashing young democrat, Mr Nasheed.
To give you an idea of just how improbable this union is, you should know that Mr Nasheed was imprisoned and tortured during Mr Gayoom’s rule.
Nevertheless these unlikely allies have prospered and – bolstered by defections from the ruling party – the opposition has managed to gain a small majority in the Maldivian parliament.
They had a plan: to stage a coup, but a democratic one.
They tabled a no-confidence vote against the speaker of the country’s parliament.
The idea was to replace him and his deputy with opposition figures, who would lead an emergency government until elections early next year.
It looked likely to work, until, that is, Mr Yameen literally called in the troops.
They barred opposition MPs from entering parliament for the vote, thereby putting paid to the plotters’ plans.
Since then Mr Yameen has been trying to strip the opposition of its majority, arresting MPs and ruling that defectors must resign their seats.
It has been enough to allow him to cling on to power, for the moment at least.
If you are wondering why on earth you should care about this sun-soaked soap opera, you need to see the wider picture: because the Maldives is at the centre of a much bigger strategic power play.
The country’s more than 1,000 islands stretch 800km (500 miles) into the Indian Ocean.
They straddle crucial sea-lanes, notably the busy but prosaically named bottleneck, the “One and a Half Degree Channel”.
It makes the Maldives a pawn in the great game for regional influence being played out between India and China, the outcome of which may influence the shape of the world economy for years to come.
But there are more basic principles at stake here too: human rights and the rule of democracy.
And they matter just as much in small nations with great beaches like the Maldives, as they do anywhere else in the world.