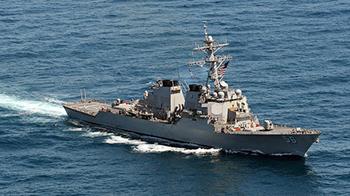 The US navy destroyer, which sailed closed to the island claimed by Beijing in the South China Sea, has violated international law and endangered China’s national security, the Chinese Foreign Ministry said.
“The US destroyer’s actions have violated Chinese and international laws, as well as severely harmed China’s sovereignty and security,” Chinese Foreign Ministry Spokesperson Geng Shuang said in a statement.
“China is very displeased with this and will bring up the issue with the US side,” the statement reads.
The Foreign Ministry pointed out that that the so-called US “freedom of navigation” mission was carried out without authorization from Beijing, with has “indisputable sovereignty over the Nansha Islands (Spratley) and its surrounding waters.”

“The Chinese army immediately sent warships (to the area) in accordance with the law to implement the identification of the US ship and warn it off,” the spokesperson said.
Beijing has also urged Washington to respect “the joint efforts of the regional countries to maintain peace and stability in the South China Sea.”
“The US provocation also forced the Chinese side to take measures to further enhance the national defense capability,” the ministry added.
Earlier Thursday, American warship USS John S. McCain sailed within a 12-mile range of Mischief Reef in the disputed Spratly chain in the South China Sea, US officials told the media.
It was the third mission aimed at challenging China’s claim on the territory under the Trump administration.
Two other US Navy ships approached China-claimed islands in the South China Sea in July and May.
Beijing is tangled in a web of territorial disputes in the areas with five regional nations – Vietnam, Taiwan, Brunei, Malaysia and the Philippines.
The South China Sea is crucial for Chinese foreign trade, serving as a major transportation route for minerals, energy and Chinese-made goods. It is also believed to be rich in natural resources, including oil.
The US says it supports none of the nations’ claims in the area and insists that the sea should be a neutral space available for free navigation.
Washington is accusing China of taking an aggressive stance on the issue because of its island reclamation projects.
Beijing insists that the artificial islands primarily serve civilian purposes like support of rescue operations and weather observation.
Thursday’s mission comes as the US seeks greater Chinese involvement on resolving the tension over its neighbor, North Korea’s, continuing missile tests, which are perceived in Washington as a serious threat to the US and its regional allies.