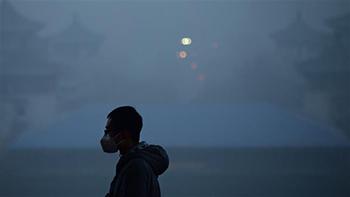 China has seen a sharp rise in the incidence of lung cancer in the past 10-15 years, with long-term exposure to air pollution a possible culprit, the official China Daily reported on Friday, citing health officials.

Experts with the China Academy of Medical Sciences said lung cancer was rising rapidly in groups not normally susceptible to the disease, including women and non-smokers, suggesting that smoking was not responsible for the increase, China Daily said.
An estimated 300 million Chinese people are smokers, but the paper said there had been a rapid increase in a form of lung cancer that develops deep in the lung and is not associated with tobacco use.
China has been waging a battle against hazardous air pollution, with concentrations of small, breathable particles known as PM2.5 frequently exceeding 300 micrograms per cubic meter in industrialized northern regions.
Last year’s national average stood at 47 micrograms, with only a quarter of cities meeting the country’s official air quality guideline of 35 micrograms. The World Health Organization recommends levels of no more than 10 micrograms.
A study published earlier this year by the British Medical Journal said China could prevent three million premature deaths a year if it raised air quality to meet WHO guidelines.
In a three-year campaign that was launched in 2015 to tackle cancer, the Chinese government acknowledged that environmental pollution had contributed to a surge of cancer cases in the country.
According to the latest figures, there were nearly 4.3 million new cancer patients in China in 2015, including 730,000 cases of lung cancer, accounting for 36 percent of the world’s total.
Cancer is responsible for around a quarter of Chinese deaths, and has become a massive burden on the country’s medical system.
Several local studies have also established links between cancer and air pollution. Research published last year by the Hebei Medical University showed that lung cancer mortality rates in the province — known as China’s most polluted — nearly tripled from 1973-75 to 2010-2011.
Water pollution and the excessive use of chemical fertilizers and pesticides has also been blamed for an increase in rural cancer rates.
(Source: Reuters)