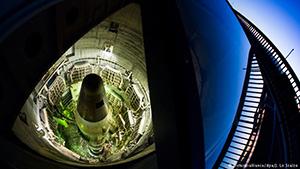 The military chain of command provides the president with complete authority to order the use of nuclear arms, Princeton researcher and Global Zero founder Bruce Blair tells DW. He also talks about potential objections.

DW: Does the US military chain of command give President Donald Trump the unilateral authority to order the use of nuclear weapons?
Bruce Blair: The protocol that has been set up for this purpose is streamlined and designed for speed and efficiency, not for deliberation. And this protocol gives the president carte blanche – complete unchecked authority to order the use of nuclear weapons.
Now some people argue that that authority can violate the constitution if the president orders the first use of nuclear weapons, others say the constitution provides this authority through Article 2, which designates the president as commander of chief of the armed forces. So you get into a little bit of debate about what is constitutional or not. But the system, the protocol, is designed to allow for one person with a single verbal order to launch nuclear weapons.
Can you describe the nature of this protocol and how the use of nuclear weapons would be carried out in practice?
The way that would work is that the president would consult as he desires with his top advisors. He is not obliged to consult with anyone, including the Secretary of Defense or the chairman of the joint chiefs of staff or the national security adviser.
He likely would and the teleconference protocol has been designed to patch in his top advisors into a secure conference call if they are not in the room with him, including the commander of the strategic forces in Omaha, Nebraska. In this case he would have a discussion with his advisors if he chose to do so.
The main talker in this conference call is the commander, the four-star general in charge of our nuclear forces in Omaha, Nebraska. He is the person who talks to the president about what options are available and what the consequences would be and he would ask the president about what kind of conditions the president would like to impose on the use of nuclear weapons, for example whether or not he would like to withhold strikes against urban populations. So that conversation is the main one in this protocol and other advisors may be invited to weigh in or may not.
And then the president makes a decision and then conveys that decision to another critical party that is patched into this emergency teleconference, and that is the emergency action center, the so-called war room at the Pentagon. So the president makes a decision, chooses among the options to him and instructs the war room, which is patched into this call to carry out that order.
At which point the war room requires the president to verify his identity using a special code, known colloquially as “the biscuit,” also known as “the gold code.” And if the president gives the right codes to the Pentagon, the Pentagon transmits an emergency message or a launch order to the forces designated by the president’s choice.
That launch order, which is roughly the length of a tweet, would be formatted and would include special codes to unlock missiles and to provide instructions to the executing commanders in the field as to the time the war plan should be carried out. And then the crews would receive that message within five minutes of the president’s decision and begin to carry it out.
How long would it take for the president’s order to be carried out?
In the case of land-based rockets in the middle west of the United States, of which there are 400, each with one warhead, those crews can carry out the order in one minute from the time they have received it. The missiles could be leaving their silos en masse in one minute from the time they have received the order. Crews on submarines would take about 10 minutes longer to carry out the order because they have extra steps that they need to carry out.
Could there be opposition among the senior advisors that’s so strong that they would try to intervene not only to oppose, but to disobey orders and to instruct the chain of command in the Pentagon war room not to carry out the order?
There you are entering into a psychological arena, and I can’t really speculate more than anyone else how that might play out.
And the fact that the military is already planning conventional and nuclear operations against North Korea, that there is already a nuclear plan for North Korea, the fact that that is an ongoing process of fine tuning, is an indication that that is already accepted that nuclear weapons might be used against North Korea. And the mere planning for that by the military indicates the accommodation and acceptance of a presidential decision to order that plan be carried out.
Once an option is chosen by the president in this protocol of decision making that I described to you, someone like the commander of the strategic command might be saying, “Mr President I think this is ill-advised, we have conventional non-nuclear options to deal with this threat and furthermore the nuclear option you prefer is probably a violation of the law of war under the circumstances.”
He may well receive that kind of advice in the emergency conference, but he can ignore it and proceed and I believe that – based on my conversations with people in the military that would be involved in situations like that – they would give their best advice and then they would carry out the order that the president gives, even if it were viewed as ill-advised, misguided and a violation of the law of war. I believe the system is very strongly predisposed to accept and carry out the president’s wishes.
Bruce Blair is a nuclear security scholar at Princeton University and a co-founder of Global Zero, an international initiative dedicated to the elimination of all nuclear weapons. He also serves as member of US Secretary of State Rex Tillerson’s International Security Advisory Board.
The interview was conducted by Michael Knigge.