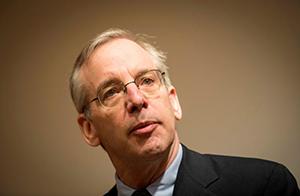 NEW YORK (Reuters) – The Federal Reserve expects “very weak” U.S. inflation to rebound thanks to a slide in the dollar and to a labor market that keeps getting hotter, one of the Fed’s most influential officials said in comments that reinforce its gradual policy-tightening plan.

In a speech on Thursday calling on the United States to do more to curb growing racial inequality of employment and income, New York Fed President William Dudley suggested the central bank was on track to raise interest rates once more and begin shedding some bond holdings this year.
Investors are somewhat skeptical that the Fed will deliver another rate hike by December, given that its preferred annual inflation reading in recent months has fallen to, and remained at, 1.5 percent, which is below a 2-percent target.
Yet Dudley, a close ally of Fed Chair Janet Yellen and permanent voter on U.S. monetary policy, said the declining dollar, which pushes up import prices, and the tightening labor market, which raises wages, “should combine to eventually push (month-over-month) inflation up.”
“I do expect it to move higher in the medium term, but probably not get all the way back to 2 percent on the year-over-year basis because, remember, we have had these very weak inflation readings for a number of months in a row,” he told reporters after the speech at the New York Fed.
Dudley predicted such annual inflation readings could remain under pressure for six to 10 months. He added that sluggish productivity growth is to blame for the one blemish in otherwise strong recent job reports: persistently weak wage growth.
Unemployment has fallen to a 16-year low of 4.3 percent, yet wages have risen only at a disappointing 2-to-2.5-percent rate annually, which in turn reflects weak overall inflation.
The Fed has raised rates twice this year and expects to hike again, likely in December. Traders are betting the odds of that are about 42 percent, based on futures contracts, with the balance betting on a delay.
Turning to the politics of inequality, a topic that both he and Yellen have addressed in the past in the face of some criticism, Dudley said it was “deeply troubling” that research showed only 37 percent of Americans think their children will be better off than them.
In part he attributed higher jobless rates for blacks and Hispanics to technological changes and globalization that have harmed manufacturing and other middle- and lower-skill jobs, and called for better education and training policies to address it.
“The forces of technological change and globalization have contributed to wage inequality by pushing up wages for those toward the top, and stifling wage growth for workers toward the middle and bottom of the wage distribution,” said Dudley, whose term at the New York Fed ends next year.
Reporting by Jonathan Spicer; Editing by Chizu Nomiyama