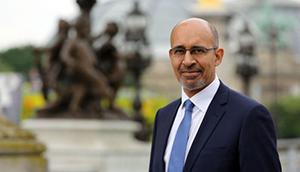 By TM
The Organization for Security and Co-operation in Europe (OSCE) Representative on Freedom of the Media Harlem Désir expressed deep concern on regarding the issuance of arrest warrants for 35 journalists and called on Turkish government to release nine journalists who were detained in İstanbul on Thursday.

In a statement on Thursday, Désir described Thursday’s media crackdown in Turkey “another baseless attack against journalists in Turkey” and said it exemplifies the alarming media freedom situation in the country.
“Countries committed to democratic principles must protect the freedom of speech and expression as a cornerstone of society. Authorities that act to undermine the work of journalists and silence those who voice disagreement are in direct violation of international standards and commitments. I urgently call on the authorities to release all journalists currently in custody or imprisoned in the country,” he said.
Nine journalists, out of 35 for whom detention warrants were issued in Turkey on Thursday, were detained in police raids to their houses over their use of ByLock application, a smart phone application that Turkish authorities believe widely used by followers of Gülen movement which is accused in Turkey of being behind a failed coup last year.
Turkey is ranked 155th out of 180 countries in Reporters Without Borders (RSF) 2017 World Press Freedom Index. The situation of media in Turkey has become critical under the state of emergency proclaimed after the coup attempt.