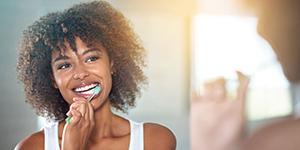 By Jenny Cook
The importance of oral hygiene is drummed into us at an early age but, at a time when one in four UK adults admit to not brushing their teeth twice a day, it seems the message still isn’t getting through.

Now, new research has found that inflammation in your mouth (often caused by poor oral health) could significantly increase the risk of developing cancer at a later stage by up to 14% – hopefully providing fresh incentive to those who are letting their brushing habits slip.
The study
Researchers analysed almost 66,000 postmenopausal women aged 54 to 86 over the course of eight years, using health surveys to deduce whether they’d ever been diagnosed with periodontal disease – a form of gum disease which is caused when bacteria-laden plaque forms on the teeth. It was found that, of the 7,100 participants who developed cancer, those with a history of periodontal disease were more than three times as likely to suffer with oesophageal cancer and twice as likely to have gallbladder cancer when compared to those with healthy teeth and gums.
In addition, the risk of lung cancer, skin cancer and breast cancer were increased by 31%, 23% and 13% respectively. Although it remains unclear why gum disease and cancer are linked, it’s thought that bacterial pathogens in the oral cavity could play a part. Senior author Jean Wactawski-Wende, dean of the School of Public Health and Health Professions at the State University of New York at Buffalo said:
“These pathogens can travel to different parts of the body through your saliva, and they come in contact with your stomach and oesophagus when you swallow, or end up in your lungs through aspiration.”
Such pathogens have previously been linked to the formation of cancer tumours and other inflammatory diseases throughout the body.
Gum disease is more common in people who smoke and drink – two known risk factors for cancer. However, the study shows that even non-smokers and drinkers remained exposed to a 12% increased cancer risk, suggesting that good oral hygiene is of the upmost importance. Wactawski-Wende added:
“Between this and other studies, we’ve seen a link between periodontal disease and heart disease, diabetes, and now cancer, so it seem to me that it would be prudent to recommend maintaining good oral health. That involves brushing and flossing, but also seeing a dental professional who can monitor and clean your teeth, and who can prevent periodontal disease or treat any cases that do arise.”
Because there was no cause-and-effect relationship established in this study, more research needs to be done. Currently, the authors are looking into the oral microbiome (the type and variety of mouth bacteria) of women with gum disease, and they plan to see if there are any patterns or links to the cancers the women may develop in the future.
The study was published in the journal Cancer Epidemiology, Biomarkers & Prevention.