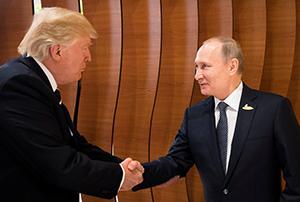 In his second meeting with reporters at his golf complex in New Jersey, US President Donald Trump said “I want to thank” Russian President Vladimir Putin for ousting hundreds of US embassy employees “because we’re trying to cut down our payroll,” the press pool reported.

The business-savvy president said the move had the benefit of “trimming payroll” though many have received the comments in jest. Trump has so far been quiet on the expulsion of US workers from Russia.
“I greatly appreciate the fact that we’ve been able to cut our payroll of the United States,” Trump said, adding “we’re going to save a lot of money… there’s no real reason for them to go back.”
“I’m very thankful that he let go of a large number of people because now we have a smaller payroll,” the forty-fifth president said.
Following the latest sanctions targeting Russia, North Korea, and Iran, Moscow moved to reduce the number of US diplomatic personnel by 755 people — bringing parity to the size of diplomatic staffs in each country.
During a briefing with reporters on Thursday, US State Department spokeswoman Heather Nauert said “the expulsions of our US diplomats and other citizens who are working over there at our embassy, we consider that to be a regrettable step.”
“If it were not for the expulsion of Russian diplomats and the closure of the Russian properties in the US by the previous administration, as well as a sanctions act passed by the current administration, we would not have taken these measures. It was not our decision to exchange barbs,” the Russian Embassy in Washington said Thursday.
During the recent ASEAN Regional Forum in Manila Russian Foreign Minister Sergey Lavrov and US Secretary of State Rex Tillerson had a meeting where the duo “agreed that they should continue to find places of agreement where our two nations can work together,” the US State Department said Thursday. “One of the places where we can work together is in southwest Syria in a ceasefire… that may not seem like a lot to some folks around here” in Washington, “but it’s an area in which we can work together, try to build trust, and try to find areas of mutual cooperation.”