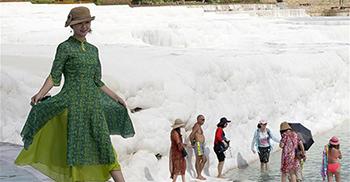 Turkish tourism players want to host 1 million Chinese travelers in 2018, which has been declared “Turkey Tourism Year” in China, within the framework of the “One Belt One Road” project.

The head of Wanda Real Beijing, which is owned by China’s Wanda Group, Fuat Köroğlu, told state-run Anadolu Agency said that the declaration of 2018 by China as “Turkey Year” would create significant opportunities for the sector.

“The main problem of Turkey has unfortunately been wrong marketing policies. In order to evaluate this key opportunity, a comprehensive marketing and PR plan must be immediately prepared. The Chinese market is a very big and ready market,” Köroğlu said.

Marketing and PR work must be carried out to appeal to Chinese TV, he added.

A leading tourism player from the Aegean province of Denizli, where Pamukkale is located with its iconic white travertine stones, said up to 95 percent of Chinese tourists visiting Turkey came to Pamukkale. Other popular destinations for Chinese tourists are Istanbul and Cappadocia, according to sector players.

Murat Şen, the head of the Denizli Touristic Hoteliers Association and a board member in the Hoteliers Federation of Turkey (TÜROFED), said the number of Chinese tourists had soared since 2011.

While some 98,000 Chinese tourists visited Turkey in 2011, this figure rose to 313,000 in 2015. The number, however, decreased sharply last year amid security concerns and other negativities, according to sector representatives.

In the first five months of this year, around 81,000 Chinese tourists visited Turkey.

“Our aim is to host nearly 300,000 Chinese travelers this year, but that is not enough. Nearly 180 million Chinese people travel abroad every year and spend a total of $250 billion,” Şen said, noting that the number of Chinese tourists visiting Turkey was quite low compared to Europe.

“Turkish tourism players need to attend all tourism fairs in China. We must promote our destinations there, as most of them are unknown … In addition, flights should start between Turkish destinations that are very popular among Chinese travelers, such as between Pamukkale and Capadoccia,” he said, adding that this would help Turkey lure more than 1 million Chinese tourists.

“A short tourism promotional clip must be prepared and broadcasted on all Chinese TV channels,” Wei said.

“Security measures are of great importance as well. Foreigners were afraid of visiting Turkey in 2015 and 2016 due to a series of bad terror attacks. But as there has not been any security issue in the last seven or eight months, foreigners’ appetite to visit Turkey has resumed again,” he added.