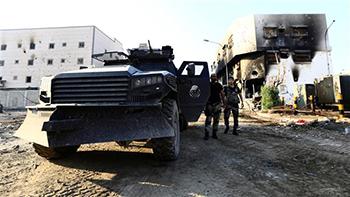 The UN has reacted to media reports about a deadly and destructive Saudi military crackdown against an eastern Shia town, urging the regime in Riyadh to respect human rights.
Speaking at a press conference in New York, Stephane Dujarric, the spokesman for UN Secretary General Antonio Guterres, said the world body could not independently verify the reports coming out of Awamiyah, but that all Riyadh’s actions should be in line with its commitments to human rights.

The UN wants Saudi Arabia to take human rights and international regulations into consideration before taking any action, the official was quoted as saying by the London-based New Arab media outlet.
Awamiyah is located in the Qatif region of Saudi Arabia’s Shia-populated Eastern Province. The small town of 30,000 that has, since 2011, been the center of anti-regime rallies, with the protesters calling for end to the kingdom’s discriminatory policies against the Shia minority.
The region has witnessed sporadic deaths of Saudi forces at the hands of unknown gunmen. Riyadh blames the Shia population for such assaults.
Since May, Riyadh has imposed a siege on Awamiyah in what it calls a “security campaign” against the gunmen there, launching almost daily attacks against the town, destroying residential areas and setting fire to buildings.
The al-Musawara neighborhood, Awamiyah’s old quarter, has been the hardest hit area in the crackdown.
The regime has subjected the neighborhood to a so-called renovation project, which has featured wholesale destruction of age-old structures, rampant raids against various targets, and reported threats against Shia residents to either leave or face potentially deadly swoops.
UN experts in April voiced concerns over the demolition of the 400-year-old neighborhood, saying the move threatens Awamiya’s cultural heritage.
Dujarric said last week that the UN “could not” enter conflict zones in the kingdom to examine the situation on the ground for itself.
His latest comments came after Reuters released footage of destruction in Awamiyah, which has been almost razed to the ground.
Reuters reported that a number of journalists had been allowed into the city as the first outside witnesses of the damage caused by the Saudi military operation there.
On the lamp posts and walls, portraits of the victims, including a 16 one, could be seen, with graffti along one rubble-strewn street reading, “The land which is mixed with the blood of martyrs gets sufficiently watered by God’s light to defeat the mighty.”
New videos circulating on social media on Wednesday showed Saudi forces celebrating by linking arms and dancing in a circle, with their automatic weapons raised in the air, while bulldozers continued to destroy more buildings in the town.
Locals, according to the report, said nine civilians, including a three-year-old boy, had been killed in the violence over the past week and more than 20,000 had fled or been evacuated from the conflict zone.