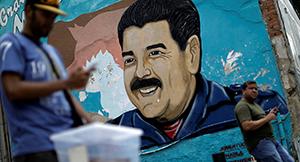 Venezuelan President Nicolas Maduro said Thursday he wanted to hold a private conversation with his US counterpart, Donald Trump.
MOSCOW (Sputnik) — The Venezuelan leader told his newly-installed constituent assembly he wanted to normalize relations with the United States after the recent rise in tension between the two countries.

“The foreign minister should enter into negotiations to arrange [my] personal meeting with Donald Trump or a phone conversation with Donald Trump,” Maduro said in parliament, as quoted by the Panorama newspaper.
Trump has routinely accused Maduro of dictatorship after his decision to create a 545-seat legislative suberbody with a power to rewrite the constitution. Maduro claims it will help reconcile and bring peace to the nation.