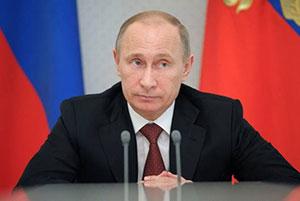 Eugene Rumer, Andrew S. Weiss
Summary: Russia’s renewed activism isn’t about dictating events in particular corners of the world. It is about exploiting opportunities to undermine and hollow out the U.S.-led international order, with its norms of economic openness, democratic accountability and the rule of law.

Former President Barack Obama once dismissed post-Soviet Russia as a mere “regional power,” but that isn’t how things look today. Vladimir Putin has gone global in recent years, launching a Russian-style charm offensive in far-flung locales where the Kremlin’s influence had been all but written off. Russian voices, fingerprints and footsteps have been showing up over much of the Middle East and Europe, parts of Africa and even in Latin America.
Moscow has found numerous openings and is busily exploiting divisions within the Western camp. The agenda is straightforward: to assert Russian influence at the expense of Washington and the rules-based international system that the U.S. has built and led since World War II. The Russian tool kit includes undermining democratic governance, stoking ethnic and religious tensions, and building new outposts for gathering intelligence and projecting military power. Where the U.S. and its partners have pulled back or failed to deliver, Russia has eagerly stepped in.

Mr. Putin can point to a string of successes in recent years. Russia’s brazen meddling in the 2016 U.S. presidential election has triggered the worst American political crisis since Watergate, leaving President Donald Trump consumed by investigations (to say nothing of Mr. Trump’s “America First” rhetoric and enthusiasm for Mr. Putin, which have eased Russia’s way). In Syria, Russian bombs, arms and boots on the ground turned the tide of the civil war and saved Mr. Putin’s bloodstained ally, Bashar al-Assad. Even the resounding defeat of Marine Le Pen, the pro-Russian candidate in France’s recent presidential election, was a reminder that no country in Europe can dare to ignore the risk of Russian interference in its domestic politics.
But these are just the most familiar cases of Mr. Putin’s growing reach. Elsewhere in the Middle East, Moscow has used arms sales, disinformation, intelligence operations, diplomatic footwork and plain old hard power to further its agenda. In recent weeks, Mr. Putin and Turkish President Recep Tayyip Erdogan —who has taken a decidedly autocratic turn and distanced his country from its NATO allies—have reportedly been finalizing a $2.5 billion deal for Turkey to purchase an advanced Russian S-400 air-defense system.
In the chaos of Libya after the fall of Moammar Gadhafi, Mr. Putin spotted another opportunity. Moscow has struck up a partnership with Khalifa Haftar, a Gadhafi-era general-turned-warlord who has been battling Islamists from his stronghold in Benghazi (and who long ago received military training in the Soviet Union). In recent months, Russian special forces and drones have reportedly been deployed from a base in neighboring Egypt to support Gen. Haftar’s forces.
In Libya, Mr. Putin has both geopolitical and commercial motives. Russia’s operation is payback for the U.S.-led coalition that deposed its ally Gadhafi, and it helps Moscow to shape the country’s future. Russia is also eager to revive the lucrative weapons, oil and construction deals that were canceled after Gadhafi’s fall.
Next door in Egypt, Mr. Putin is wooing a U.S. partner whose relations with Washington have been rocky in recent years. Mr. Obama froze some arms transfers to show his displeasure with Egypt’s autocratic ruler, President Abdel Fattah Al Sisi, and Russia has stepped in to offer its own hardware. Russia’s state-owned arms manufacturers, unburdened by scruples about human rights and democracy, are eager to reclaim the market share that they lost decades ago when Egypt left the Soviet orbit.
In the Persian Gulf, relations between Washington and its longtime partners, the oil-rich Sunni monarchies, took a hit during Mr. Obama’s term, creating another opening for Moscow. Russian envoys are now working to cut deals with them on Syria and the sale of advanced weapons and have even coordinated cuts in oil output to prop up prices. The Trump administration’s recent moves to patch up ties with Saudi Arabia, the United Arab Emirates and Egypt have failed, so far, to diminish the Arab autocrats’ newfound affection for their Russian friends.
Russian intrigue is also creating headaches for the West in an often overlooked theater: the Balkans. NATO’s newest member, tiny Montenegro, will soon try two alleged Russian intelligence operatives in absentia for their role in a failed coup attempt last October. Prosecutors have outlined lurid details of what they see as a Russian-directed plot, apparently intended to kill then-Prime Minister Milo Djukanovic and to keep Montenegro out of NATO. The Russian operatives accused of leading the plot are said to have doled out encrypted mobile phones and to have provided cash to buy weapons, police uniforms and bulletproof vests. The coup failed, but it suggests how strongly Russia wishes to extend its sway in the Balkans.
Russia’s ambitions stretch well beyond the familiar confines of Europe and the Middle East. In South Africa, Russia is implicated in the scandals engulfing Jacob Zuma’s presidency. Mr. Zuma is being dogged by corruption allegations for, among other things, his role in arranging a budget-busting $76 billion deal with Mr. Putin to have a state-owned Russian company build up to eight nuclear power plants. A South African court recently ruled that the deal violated the constitution and laws on state procurement. Mr. Zuma, who received military (and probably intelligence) training in the Soviet Union when he was fighting apartheid, has been actively courted by Mr. Putin.
Closer to home, the Kremlin’s Cold War-era ally in Nicaragua, the Marxist Daniel Ortega, has put out the welcome mat for the construction of mysterious Russian facilities in the capital, Managua. Senior Russian officials say that they are also working to re-establish a military and intelligence presence in Cuba.
Why should the U.S. care about Mr. Putin’s growing reach? After all, Russia cannot expect to dominate Europe. It cannot simply have its way in the turbulent Middle East or turn the Balkans into its satellite. Whatever footholds it can find in Africa or Latin America will probably be too small to pose much direct challenge to Washington and its partners. And of course, Russia’s mischief-making is hardly the root cause of the challenges bedeviling these regions and countries.
But there is reason to worry. Russia’s renewed activism isn’t about dictating events in particular corners of the world. It is about exploiting opportunities to undermine and hollow out the U.S.-led international order, with its norms of economic openness, democratic accountability and the rule of law. The thread connecting Russia’s agenda, from Turkey to Nicaragua to South Africa, is its aim of pulling as many international actors as possible away from the rules-based institutions and security arrangements that the U.S. has worked so diligently to build over the past several generations.
Mr. Putin is betting that he can rewrite the rules of world politics to his advantage. It is the job of American leaders and strategists to show him that he is mistaken.
This article was originally published in the Wall Street Journal.