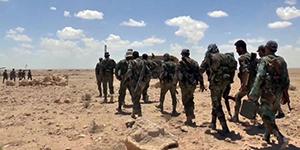 Provinces, SANA – Army units restored control of more than 30 km of the border line with Jordan in the eastern countryside of Sweida where border guard forces established their points at all the border posts in the area.

A field commander on the axis of the eastern countryside of Sweida told reporters that under the directives of the General Command of the Army and the Armed Forces, units of the army carried out a successful mission towards al-Badia (desert) in the eastern countryside of Sweida in several stages, where the first phase launched from the east of Sweida until al-Zalf Dam, while the second phase extended from al-Zalf Dam to Tal Jarin.
The commander added that the third phase was launched from the axis of al-Zalf Dam and Tal Jarin to the strategic points in Tal al-Dabaa, Tal Dbeiaa, Tal Ryahi and Tal Assada.
The final phase culminated in the liberation of the areas stretching to the international border with Jordan and in establishing control over all border posts and points in this direction.
The commander said that the liberated area during the military operation in the countryside of Sweida exceeded 4,000 square kilometers, stressing that the operations will continue until securing the rest of the border posts.
The commander pointed out that the importance of the military operation in this direction comes from “restoring control over large geographical areas and cutting off the main supply lines for terrorist groups from the crossings of Bir al-Sout and Abu Sharshouh, which are two of the most dangerous crossings to smuggle weapons and terrorists into the countryside of Damascus, Sweida and Daraa and towards al-Badia area.
A border guard officer told reporters that the border guards have been deployed, and they established their points on a front of more than 30 km after regaining control of a number of points and strategic hills near the Jordanian border, adding that in parallel with that, they closed the crossings which were opened by terrorist organizations from Jordan towards the Syrian territories, which means cutting off the supply routes of terrorist organizations completely.
Homs
Army units operating in the eastern countryside of Homs expanded control regaining al-Tarfawi village after inflicting heavy losses upon ISIS terrorists in personnel and arms.
A military source told SANA that the army units continued operations in pursuing ISIS terrorists in the eastern countryside of Homs and established control over al-Tarfawi village to the northeast of Abu al-Alaya in Jebb al-Jarrah area, 73km east of Homs, killing many of the terrorists and destroying the vehicles and munitions that were in their possession.
The source noted that the demining experts have dismantled IEDs and mines in the village, while the army units continued pursuing terrorists feeling towards the neighboring villages.