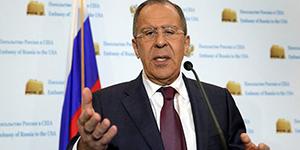 Moscow, SANA – Russian Foreign Minister Sergey Lavrov affirmed that resolving the crisis in Syria would have been greatly advanced if the United States kept its promise to separate the “opposition” from the terrorists.

During a meeting with the participants in the national Educational Youth Forum, Lavrov said that about a year ago, during negotiations with former US Secretary of State John Kerry, Moscow and Washington were able to agree on a settlement approach in Syria, which was constituted real progress and provided full consensus in the work of the Russian Aerospace Forces and the US-led coalition, and the only requirement in this agreement was the US commitment to separate the “opposition” that it supports from terrorists.
Lavrov believed that the political process in Syria would progress significantly if the Americans actually carried out their promise.
He said that ISIS terrorist organization will undoubtedly be defeated but it is hard to say yet when it will happen.
“There are a lot of signs that some external players have been protecting Jabhat al-Nusra terror group, while the US has been silently encouraging them,” Lavrov said, adding “at least, I don’t remember the US-led coalition, that has been conducting attacks on ISIS, carrying out any significant operations against Jabhat al-Nusra.”
He pointed out that despite the clash between ISIS and Jabhat al-Nusra, they are similar as al-Nusra is included in the UN’s list of terrorist organizations, yet there are indications that some external players, perhaps with implicit encouragement by the United States, are preserving it and there is suspicion that their goal is to use al-Nusra against the Syrian government after the complete defeat of ISIS.
Lavrov described contacts between Russian and US diplomats and military personnel on Syria as highly professional and pragmatic.
“I’m open to any partners. The main thing is that we should not just continue talking, but start coming to agreements, the way it happened regarding the establishment of the de-escalation zone in southwestern Syria,” he said.
“Such contacts are important in the fight against terrorism, as well as for contributing to the political process and creating a space for the Syrian government and the opposition to sit down and start discussing the future of their country without any outside intervention,” he noted.
Manar al-Freih / Hazem Sabbagh