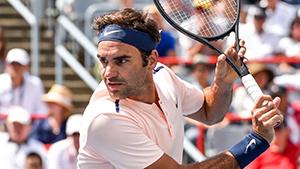 The Swiss second seed turned 36 earlier in the week and is back in action for the first time since his success over Marin Cilic at the All England Club, where he won a record eighth singles title.

Federer, who is hoping to close up on Nadal Rafael and Andy Murray the top of the world rankings with, broke back against Haase early in the first set to establish a 4-1 advantage, which he never looked like relinquishing.

Haase, the world number 52, made a contest of it in the second set as he held serve in a crucial 11th game which then brought up a tie-break.

Federer moved 4-1 ahead after securing a couple of mini-breaks, only for Haase to respond again by taking the next two points against serve and then moved 5-4 ahead.

However, Federer’s experience – having last won the tournament in 2006 and since been a beaten finalist on three occasions – saw him through as the world number three held twice to set up a match point, which he converted against the Haase serve at the first time of asking.