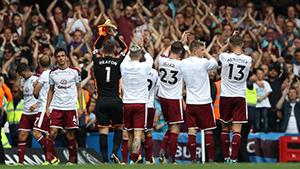 Watford 3-3 Liverpool
Chelsea 2-3 Burnley
Crystal Palace 0-3 Huddersfield
Everton 1-0 Stoke
Southampton 0-0 Swansea
West Brom 1-0 Bournemouth
Brighton 0-2 Manchester City
Premier League champions Chelsea finished with nine men as they slumped to a 3-2 home defeat by Burnley in their first match of the season, while new boys Huddersfield romped to a 3-0 win at Crystal Palace and went top of the table.
The Clarets were priced up at 11/1 to claim a three-point haul by Sky Bet before the match but they went in at the break as 1/20 favourites.
Chelsea had captain Gary Cahill dismissed after only 14 minutes following the defender’s reckless challenge on Steven Defour, which saw referee Craig Pawson brandish the first red card of the 2017/2018 Premier League campaign.
Burnley saw Sam Vokes’ header ruled out for offside, but the Wales forward then put them ahead on 24 minutes when he sent a volley past Thibaut Cortouis.
Defender Stephen Ward added a second for the visitors on 40 minutes and Vokes’ header made it 3-0 just before half-time.
Chelsea’s club-record signing Alvaro Morata replaced Michy Batshuayi just before the hour mark – and the former Real Madrid man soon opened his Premier League account on 69 minutes when he headed in Willian’s cross.
The Spaniard saw another close-range effort ruled out for offside, before midfielder Cesc Fabregas was sent off in the 81st minute for a second caution after a foul on Jack Cork.
Although David Luiz pulled another goal back for the champions with two minutes left, there was to be no grandstand finale.
A 3-2 victory for Burnley was priced up at 80/1 by Sky Bet before the action started.
Conte is now the 11/4 favourite in Sky Bet’s next Premier League manager to leave odds and the Blues are 7/1 third-favourites to retain their title.
Burnley are odds-on at 2/5 to stay up after a famous victory.
At Selhurst Park, Huddersfield – promoted after winning a penalty shoot-out in the Sky Bet Championship Play-off final – found themselves ahead on 24 minutes when Palace defender Joel Ward diverted the ball into his own net following a corner.
It was 2-0 just a couple of minutes later when Steve Mounie, a club record £11.5million summer signing from Monpellier, headed in a first Premier League goal for the Terriers.
Mounie found the net again with 10 minutes left, converting Collin Quaner’s cross as the West Yorkshire club marked their long-awaited return to the top flight in some style.
Huddersfield were priced up by Sky Bet at 18/5 to get the three points and the online bookmaker now make the early leader a 1000/1 shot for the title!
Backers of a double for Mounie were celebrating a 20/1 winner and the Terriers are no longer odds-on for relegation, available at 11/10.
Wagner’s side are 8/11 to stay up.

Brighton are also embarking upon a first Premier League campaign, back in the top-flight after 34 years, but were beaten 2-0 at home by Manchester City in Saturday’s late kick-off.
After seeing Gabriel Jesus’ scrambled effort ruled out for a handball and another in the second-half for offside, Brighton looked to be holding out against big-spending City until Sergio Aguero made the breakthrough with 20 minutes left.
The Argentina forward latched onto a pass from David Silva and drilled the ball past Seagulls keeper Matthew Ryan.
Any hopes of a spirited comeback at the Amex Stadium ended five minutes later when Brighton defender Lewis Dunk headed a cross from Fernandinho into his own net.
Title favourites City are now as short as 5/4 with Sky Bet to finish at the summit and 1/10 for a spot in the top-four.
Wayne Rooney marked his Premier League return to Everton with a superb header on the stroke of half-time which proved enough for a 1-0 win over Stoke at Goodison Park.
After 13 record-breaking years at Manchester United, the 31-year-old made the ideal mark on his Premier League homecoming.
Earlier in Saturday’s noon kick-off, Miguel Britos scrambled home a controversial stoppage-time equaliser as Watford secured a dramatic 3-3 draw against Liverpool at Vicarage Road.
Liverpool were as short as 1/100 with Sky Bet to win the match in the moments before that equaliser and the draw was 50/1 in injury-time.
Stefano Okaka opened the scoring with just eight minutes gone, with Abdoulaye Doucoure re-establishing the Hornets lead shortly after Sadio Mane had equalised.
Liverpool rallied and Roberto Firmino levelled from the penalty spot after debutant Mohamed Salah was fouled. The Reds were out at 7/2 with Sky Bet to get the win before that goal.
Salah put the visitors ahead only for Britos to pounce late on and give Marco Silva a positive first outing as Watford boss.
Elsewhere on Saturday afternoon, West Brom beat Bournemouth 1-0 at The Hawthorns.
Egyptian defender Ahmed Hegazi, who joined the Baggies on loan from Cairo club Al Ahly, nodded the home side in front after 31 minutes following a free-kick from Chris Brunt.
Bournemouth sent on England stiker Jermain Defoe, a summer free transfer from relegated Sunderland, just after the hour, but could not conjure up an equaliser.
Southampton and Swansea had to settle for a point each after their goalless draw at St Mary’s Stadium.