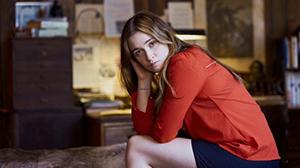 Andrew Taylor
Jane Campion has turned her daughter into a monster.

In the second season of Campion’s Top of the Lake television series, Alice Englert – Campion’s 22-year-old daughter with former husband, Australian filmmaker Colin Englert – plays Mary, a 17-year-old at war with her parents and the world.

Mary is angry, rebellious and precocious. She is furious with her adoptive mother, Julia (played by Nicole Kidman) and casually manipulative of her father, Pyke (Ewen Leslie). Her boyfriend is every parent’s worst nightmare – an unkempt middle-aged German who lives above a brothel and is prone to bouts of aggression.

As Englert points out, Mary is not always easy to like. “You’re challenged to root for her,” she says.

Campion, who wrote Top of the Lake: China Girl with long-term collaborator, Gerard Lee, created Mary with Englert in mind. But, she says, “clearly the story of Mary is not Alice and my story”.

“What we do have is a mother-daughter relationship that’s full of all that love and complexity.”

Campion sees aspects of herself in the story’s various mothers; in Kidman’s fierce, intellectual feminist, and in Mary’s birth mother Robin Griffin, the talented but troubled detective played by Elisabeth Moss in a return performance from season one.

In the first series, Moss’ character busted open a paedophile ring operating in New Zealand’s scenic South Island. Season two shifts the action to Sydney, where Griffin is investigating the death of a young woman whose body is found in a suitcase washed up on Bondi Beach. The six-part mystery moves between a brothel staffed by Asian sex workers and the well-heeled suburbs where Griffin finds the daughter she gave up as a baby.

When Campion and Lee started thinking about the second season, they talked about the things that mattered most in their lives. “I think those relationships with our children are really vital,” Campion says.

“The idea of your daughter falling in love with a much, much older person – and passionately and innocently in love [when] he’s clearly a complicated and probably not a very good guy – intrigued us.”

Campion and her daughter previously worked together when Englert was 12, on the 2006 short film, The Water Diary. Englert speaks of her mother with admiration and affection, referring to her as both “Mum” and “Jane”.

“We have a kind of friendship as well as a mother and daughter-ship, and we like working with each other,” Englert says. “I’ve watched her work for so long and I always loved it because she has this energy and direction and oh … such a discerning eye.”

Though Campion is not an actor, Englert has said she has been a key influence. “She inspired the way I think about film and the way I like to work,” she told Vanity Fair in a 2013 interview.

In making Top of the Lake: China Girl, Campion reportedly asked fellow director Ariel Kleiman to take charge of Englert’s more distressing scenes. As for Englert, she focused on behaving as one of the cast on set, rather than as a daughter. During the filming, she turned to other family members where she might ordinarily have sought her mother’s counsel.

“I didn’t want to have to talk to Mum about anything she might worry too greatly about,” she says. “I didn’t want her to think about things she couldn’t fix.”

She chatted instead to the other actors on set: Moss, Kidman, and Game of Thrones’ Gwendoline Christie, who plays Griffin’s partner on the police investigation. “I really found the girls, the ladies in this … very encouraging and inspiring because I could see how they took the focus and the consequences of that focus and hard work seriously,” Englert says.

Playing Mary, a character in turmoil who Englert describes as a “mystery on the page”, took an emotional toll. “By the end of it, I was ready to leave Mary and have my own problems again,” Englert says. “I liked her and disliked her as well. I felt I could really play her once I figured out that she is a person who doesn’t always make sense and wasn’t even making sense to herself … She is aware of what a monster she can become.

“I think I underestimated when I was a little younger how much of a toll [acting] can take on your body. Your body becomes confused and if you can’t acknowledge that – that you’re sort of misleading it – you’re creating emotional havoc.”

Thanks to her mother, Englert has been immersed in the world of movies from an early age. She apparently had lunch with Johnny Depp when she was just three months old. Kidman, an old friend of Campion’s, is Englert’s godmother.

Before Top of the Lake, Campion was famous as a director for films including Sweetie, An Angel at My Table and the Oscar-winning The Piano. Englert has said that her parents discouraged her from seeking a career in the limelight. Regardless, she dropped out of school to pursue acting, signing with an agent rather than taking on formal training.

“I’m really happy she chose her own path,” says Campion. “I did feel pretty scared, I remember, when she was 13 and said, ‘I think I want to be an actor’.”

Nevertheless, she helped her daughter prepare for auditions. “[It was] one of the ways we kind of bonded, really,” she says. “With a teenaged kid, to be able to work on something in-depth and seriously, it was kind of a special connection for us.

“We worked a lot together over about two or three years and she really didn’t get any of the roles. Obviously she did quite well in that they kept giving her calls – and suddenly she started to get everything.”

Englert’s work has included the arthouse movie Ginger & Rosa, for which she was nominated as best supporting actress at the 2012 British Independent Film Awards. She has appeared in the low-budget horror In Fear, the television series Jonathan Strange and Mr Norrell, and received critical praise for her role in big-budget fantasy Beautiful Creatures, despite the 2013 film’s mixed reviews and poor performance at the box office.

She is also a writer and musician, and can be seen on YouTube performing her self-penned songs, Necessary Pains and Needle and Thread.

Following her mother’s example, she has written and directed short films, Family Happiness – which will screen at this year’s Melbourne International Film Festival – and The Boyfriend Game.

A burgeoning acting career comes with its share of glamour: interviews, sessions with stylists and makeup artists, photo shoots with the likes of Vanity Fair. Today’s shoot, in a quiet suburban street of North Sydney, is a lower key affair. Englert is wearing maroon dungarees and a striped jumper bought for her by her father. As she strikes a pose in the doorway of a brick warehouse, she catches the attention of a couple of young men strolling past in singlets and stubbies.

“Need another model?” asks one, cigarette firmly stuck to his lower lip.

Englert flashes a smile, then says under her breath, “Straaaaya”.

Shyness or perhaps gallantry prevents the men from repeating their offer. Instead, they perch on a gutter to watch.

It’s all in a day’s work for a young actor on the rise. The family connections don’t hurt, but she is determined to put in the time and effort it takes to cement a career.

“I’m finishing writing my first feature and then I’m just gonna audition,” she says. “I really want jobs. I wanna try and do some kick-ass acting.”

Top of the Lake: China Girl airs on BBC First from August 20.