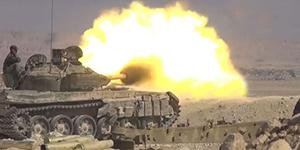 Hama, Deir Ezzor, SANA, Army and Armed Forces units, in cooperation with popular defense groups, established full control over a number of strategic hills in the surroundings of Salba village to the east of Salamiyeh city.

SANA’s reporter said that this was achieved after carrying out intensive operations against ISIS terrorists and eliminating their latest gatherings in the area, adding that army units found a
tunnel network in the hills which the terrorists were using to move and store ammunition and food supplies.
Deir Ezzor
Syrian Army units engaged in clashes with ISIS-affiliated terrorist groups southwestern of Deir Ezzor city, while the Syrian Air Force carried out a series of airstrikes against their positions in the city and the surrounding area.
Army units killed a number of ISIS terrorists and injured others, destroying their arms and ammunition in violent clashes at the axis of al -Bughailyia-al Panorama.
The Syrian Air Force destroyed dens and hotbeds of ISIS terrorists and killed scores of them in intensive airstrikes against their positions to the west of Deir Ezzor City, al-Mawared area, Hwaijet Qati’a, al-Tharda roundabout, the surroundings of the Airport, and in the neighborhoods of al-Hwaiqa, the Old Airport and al-Omal.
The airstrikes targeted fortifications of ISIS in the villages of al Bughailyia, al- Junaina, al-Shoula, al-Shmaita and al-Tibni, inflicting heavy losses upon them in the equipment and personnel.
Local sources in the eastern countryside of Deir Ezzor said that a group of ISIS terrorists, including Alaa al-Anad al-Mustafa, fled from al-Mohassan town to an unknown destination.
Terrorists of ISIS executed three young men on charge of fighting against the organization at the entrance of al-Ramadi village in the countryside of al-Bukamal city in the eastern countryside of Deir Ezzor.