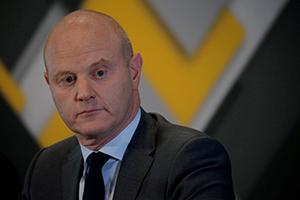 Paulina Duran and Byron Kaye
SYDNEY (Reuters) – Commonwealth Bank of Australia (CBA.AX) CEO Ian Narev will retire by next June, Australia’s No. 2 lender said on Monday, after a week of damaging publicity about a money-laundering lawsuit led to calls for the long-serving chief to resign.

Narev, 50, would be gone by the end of the current financial year after almost seven years in the job, a tenure marked as much by record profits as allegations of serious misconduct including insurance scams and poor financial advice.

CBA Chairwoman Catherine Livingstone said Narev’s departure had nothing to do with the latest scandal, allegations by the financial intelligence agency that criminals and terror financiers laundered millions of dollars through CBA accounts.

The case is the first lawsuit of its kind against a major Australian bank and could expose CBA to the largest fine in Australian corporate history, amounting to billions of dollars. Narev has blamed a coding error for most of the breaches and CBA says it will defend the case..

“This statement has not been rushed,” Livingstone told journalists, referring to the timing of Narev’s retirement announcement amid daily negative headlines for the bank.

Investors have been rattled by the third misconduct scandal under Narev’s watch. CBA shares have fallen 3.7 percent, wiping nearly A$5 billion ($3.95 billion) off its market value, since the AUSTRAC agency filed its lawsuit on Aug. 3.

A better-than-expected 4.6 percent rise in annual profit to A$9.88 billion, posted on Aug. 9, failed to appease investors’ concerns. It was the bank’s eighth straight record cash profit.

CBA shares were up 0.8 percent on Monday, against a 0.5 percent gain on the broader market.
REPLACEMENT

CBA’s annual report revealed that Narev, who has led the bank since December 2011, took a 46 percent pay cut because of the “significant damage caused to the group’s trust and reputation” in light of the lawsuit.

Livingstone said the exact date of his departure would depend on the search for a replacement, and succession planning had been under way since she became chair early this year.

“This is part of an orderly process,” she said.

The series of scandals under Narev’s leadership has raised questions about how CBA will find a replacement with no ties to controversy. Including Narev, the bank’s last three CEOs worked at the company before taking the role.

Australian media have suggested the person most likely to succeed Narev, the bank’s retail boss, Matt Comyn, may now face questions about his suitability because of the lawsuit.

Livingstone declined to comment on CEO candidates and said the search for a replacement would look at internal and external candidates.

South Australian Senator Nick Xenophon had led calls for Narev to step down, saying the money-laundering case showed the need for a sweeping judicial inquiry into Australia’s banking system.

For a graphic on the accusations against CBA, click here