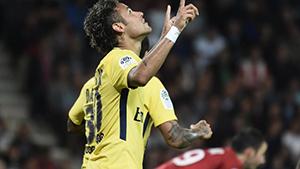 Neymar marked his Paris St Germain debut with a goal and an assist as the capital club cruised to a 3-0 Ligue 1 win at Guingamp.

The Brazil forward, making his much-anticipated first appearance for PSG since joining them from Barcelona for a world-record 222million euro (£200.6million) transfer fee, opened his account with a simple close-range finish in the 82nd minute, set up by Edinson Cavani.

Neymar had earlier provided a delightful 62nd-minute pass from which Cavani struck to make it 2-0.

And the world’s most expensive player had also been involved in the build-up to the opener in the 52nd minute, a Jordan Ikoko own-goal, as he attempted to play in Cavani.

Starting on the left of a front three also featuring Cavani and Angel Di Maria, but given considerable licence to roam, the 25-year-old produced plenty of impressive moments in what will surely go down as a memorable start to his PSG career.

Radamel Falcao netted a hat-trick while Kylian Mbappe watched from the bench as champions Monaco made it two wins out of two Ligue 1 games so far with a comfortable 4-1 triumph at Dijon.

Nine days on from Mbappe limping off in the 3-2 victory over Toulouse, and amid considerable speculation linking him with a move to Paris St Germain, the 18-year-old was named as a substitute for this contest by boss Leonardo Jardim.

And he remained unused as fellow forward Falcao took centre stage at the Stade Gaston Gerard.

The Colombian opened the scoring in the third minute, producing a close-range finish after Kamil Glik headed goalwards.

The visitors’ advantage was subsequently doubled 22 minutes later by a wonderful Jemerson overhead kick, before Falcao added his second in the 37th minute via a curling effort from the edge of the box that may or may not have taken a slight deflection off Cedric Yambere.

Dijon pulled a goal back a minute prior to the break when Wesley Said controlled a long ball over the top and prodded neatly through Danijel Subasic’s legs.

Falcao then wrapped up his treble with a powerful header six minutes after the break.

Strasbourg secured their first win back in the top flight following promotion by beating 10-man Lille 3-0 at the Stade de la Meinau.

Late second-half goals from Jonas Martin, Dimitri Lienard, from the penalty spot, and Jeremy Grimm earned the Ligue 2 champions maximum points after Lille goalkeeper Mike Maignan had been sent off.

Maignon was shown a straight red card in the 62nd minute for violent conduct after he had clashed with Strasbourg midfielder Benjamin Corgnet.

Lille striker Nicolas de Preville replaced Maignan in goal, but could do little when Martin’s low shot into the bottom corner gave Strasbourg a 74th-minute lead.

Lienard’s penalty, for Edgar Ie’s foul on Kader Mangane, made it 2-0 eight minutes later and Grimm smashed home Strasbourg’s third from outside the box in the closing stages.

A late goal from Lucas Ocampos secured Marseille a 1-0 win at Nantes on Saturday to maintain their 100 per cent start to the new campaign.

Rudi Garcia’s men had seen an effort from Florian Thauvin ruled out for offside before Maxime Lopez sent an effort just wide.

The visitors, though, made sure they left La Beaujoire-Louis-Fonteneau with all three points when Argentinian midfielder Ocampos slotted in a rebound with just two minutes left.

However, there was still time left for Nantes striker Emiliano Sala to head a late chance only just off target as Claudio Ranieri’s side were left to reflect on a second straight Ligue 1 defeat.

Marseille must now regroup ahead of Thursday’s Europa League play-off against Slovenian side NK Domzale, when they will be looking to stretch an unbeaten run which currently stands at 21 matches.

St Etienne became the third side to make it two wins out of two – following rivals Lyon on Friday night, and then OM – as they secured a 1-0 victory at Caen in Saturday’s evening kick-offs.

Midfielder Romain Hamouma netted the crucial strike on 67 minutes when he latched onto a through-ball and raced clear down the left before slotting his shot under the goalkeeper to leave Caen still pointless.

Montpellier were unable to follow up their opening win as they lost 1-0 at Toulouse, where Sweden midfielder Jimmy Durmaz converted from the penalty spot two minutes before half-time.

Bordeaux remain unbeaten after their 2-0 home win against Metz.

The hosts, who drew their first domestic match having failed to progress in the Europa League qualifiers, took the lead just before half-time through Valentin Vada, who produced a neat turn at the edge of the penalty area and a low shot inside the near post.

Senegal midfielder Younousse Sankhare added a second in the 64th minute when he swept in from close range after Brazil forward Malcom cut in from the right and clipped the ball across the six-yard box.

Angers, who drew 2-2 with Bordeaux last week, collected their first win of the new campaign after a 2-0 victory at Amiens.

Enzo Crivelli clipped home a neat finish on 27 minutes after being played into the right side of the penalty area by Thomas Mangani.

Midfielder Mangani got on the scoresheet himself early in the second half when, on 56 minutes, he lobbed the ball back over Amiens goalkeeper Regis Gurtner who had been stranded after rushing out to make a sliding challenge on Crivelli as the striker chased down a long ball.

Tunisian midfielder Khaoui struck the decisive goal in the 85th minute after Alassane Plea’s second-half penalty appeared to have rescued a point for Nice by cancelling out Adama Niane’s brilliant strike for the visitors.

Nice, who travel to Napoli on Tuesday for the first leg of their Champions League second-round qualifying tie, are left waiting for their first league points after last week’s opening-day defeat at St Etienne.

Troyes, who drew their opening game last week at home against Rennes, took the lead in style through Niane’s thunderbolt eight minutes into the second period.

Plea equalised from the spot 10 minutes later after Oswaldo Vizcarrondo’s foul on Pierre Lees-Melou, but Khaoui steered home the winner after being set up by Niane.

Lyon held on to register back-to-back wins in their first two games this season with a 2-1 victory at Rennes.

Bruno Genesio’s side struck twice in the second half through Memphis Depay and Mariano to open up a 2-0 lead and survived an anxious finale after Benjamin Bourigeaud’s late free-kick reduced the deficit.

Former Manchester United forward Depay struck direct from a free-kick to break the deadlock for Lyon soon after the break and striker Mariano notched his third goal in two games when he headed home their second in the 74th minute.

Rennes, who drew 1-1 at Troyes in their opening game, were given brief hope when Bourigeaud fired home a low free-kick in the 86th minute, but Lyon stood firm to maintain momentum after last week’s 4-0 home win against Strasbourg.
Holland’s Eredivisie

PEC Zwolle came from behind on Sunday to open their Eredivisie account with a 4-2 victory over Roda JC that puts them among the pacesetters on the opening weekend.

New signing Simon Gustafson gave Roda the lead after 22 minutes but the home side were level on the stroke of half-time through Dirk Marcellis.

Eight minutes into the second half Zwolle went ahead for the first time through an Adil Auassar own goal.

But less than 10 minutes later Gustafson got his second of the game, this time from the penalty spot, to level the scores once more.

Mustafa Saymak restored Zwolle’s lead before Bram van Polen made the points safe for the home side with 15 minutes remaining.

Champions Feyenoord were 2-1 winners against FC Twente with goals from Nicolai Jorgensen and Steven Berghuis, while Fredrik Jensen netted what proved to be a consolation for the visitors.

Excelsior got their campaign off to a winning start with a 2-1 win at Willem II.

An own goal by Willem II goalkeeper Timon Wellenreuther, who was credited with the last touch following an Excelsior free-kick, gave the visitors the lead.

Zakaria El Azou put the visitors 2-0 up seven minutes into the second half before Fran Sol got Willem II’s consolation goal with 25 minutes to go.

Ajax suffered an opening-day defeat after losing 2-1 at Heracles on Saturday.

Hakim Ziyech, who has been linked with Liverpool recently, lashed in a brilliant 57th-minute opener with a first-time attempt from the edge of the box that crashed into the net.

However, Heracles soon levelled with a Paul Gladon near-post finish that goalkeeper Andre Onana should have kept out before Brandley Kuwas curled in a fine winner after cutting in off the right flank.

PSV made a winning start, though, by beating AZ Alkmaar 3-2 in Eindhoven.

Dabney dos Santos, on as a ninth-minute substitute for AZ, fired the visitors ahead before Hirving Lozano cut in off the left flank to level and Gaston Pereiro then put PSV in front.

Chelsea loanee Marco van Ginkel made it 3-1 and PSV held on despite Wout Weghorst’s penalty reducing the lead.

Vitesse got their campaign up and running with a 4-1 triumph over NAC, while VVV defeated Sparta 3-0.

On Friday night, FC Utrecht cruised to victory in the Eredivisie as they won 3-0 at ADO Den Haag.

Two debutants accounted for both goals from the visitors, who are looking to build on last season’s fourth-placed finish.

Cyriel Dessers got the first after only 15 minutes, with the former NAC Breda forward tapping in the rebound after Gyrano Kerk’s effort came back off the post.

Fellow new boy Sander van der Streek doubled the lead nine minutes into the second half, heading in a cross from Urby Emanuelson – an 18th-minute replacement for the injured Yassine Ayoub, who had to be helped from the pitch by his team-mates.

And with six minutes left Dessers again showed why Utrecht had plucked him from NAC as he bagged a second of the night, firing home after being afforded too much space by the ADO defence.