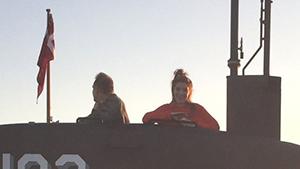 Danish police believe that a submarine at the centre of an investigation into a missing Swedish journalist was deliberately sunk.
Kim Wall, 30, was last seen on Thursday evening on board the vessel with the owner, 46-year-old Peter Madsen.

The submarine later sank and Mr Madsen was rescued before being arrested and charged with manslaughter.
The stricken vessel, the Nautilus, has been raised but no body was found and the search for Ms Wall goes on.
Mr Madsen initially said that he dropped Ms Wall off before it sank but police say he has now changed his statement – although they have not said what to.
Police gave no other information on why they thought the Nautilus was deliberately sunk, but it contradicts Mr Madsen’s explanation that there was a technical fault.
Mr Madsen has denied involvement in Ms Wall’s death, and will be held in custody for 24 days while investigations continue.
Ms Wall’s boyfriend first reported her missing after she failed to return from what should have been a short trip on the submarine.
She had been writing about Mr Madsen and his submarine, which at one stage was the largest privately-made vessel of its kind.
Police are still appealing for witnesses who may have seen Ms Wall on Thursday evening.
“We’re still hoping that we’ll find Kim Wall alive, but we are preparing ourselves for the fact that she may not be,” Copenhagen police homicide chief Jens Moller said.