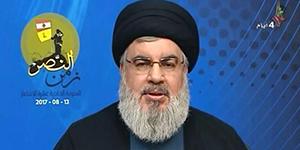 Nasrallah was speaking at a ceremony marking the eleventh anniversary of the Divine Victory in 2006 July War.
He noted to the US and the Israeli enemy’s continued efforts to prevent the ISIS from being defeated since it means a victory for Syria and the Resistance.
Nasrallah said that members affiliated to Saraya Ahl al-Sham will leave Jrud Ersal within the next few days, adding “We all wait for the Lebanese Army’s decision to launch a major battle to liberate the rest of the Lebanese Jroud region.
He assured that the victory in the battle between the Lebanese army and ISIS in Ras Baalbek and AL-Qaa outskirts is definite, stressing that the US Administration will not be able to undermine the strength and great Will of the Resistance.
Addressing some political parties in Lebanon which took a tougher stand against Syria, Nasrallah said that their scheme in Syria was foiled or about to collapse and the decision on the eradication of the ISIS is decisive and there will be no one to defend this terrorist organization after its atrocities.
He underlined the importance of opening borders and reaching an understanding with Syria since such accord serves the Lebanese national interests.
Nasrallah highlighted the sharp change in the attitudes of some countries towards Syria and the opposition which witnesses a gradual collapse following the Gulf crisis.
Sayyed Nasrallah said that the US has become sure that the game is now over in Syria and announced the failure of terrorist groups to which it has provided training and financial support, pointing out that the whole world now deals with Syria as a state and institutions.
R.Raslan/Mazen