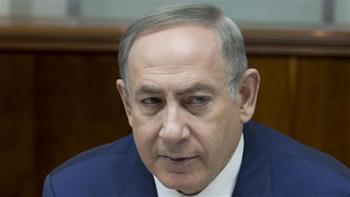 By David Wainer and Jonathan Ferziger
Inside Benjamin Netanyahu’s “aquarium,” the glassed-in suite of offices that houses Israel’s prime minister and his senior staff, Avichai Mandelblit was a big fish.

As cabinet secretary, the retired military judge was charged with whipping unruly ministers into line and carrying out the Israeli leader’s political agenda. Mandelblit supported Netanyahu through parliamentary budget battles, missile wars against Hamas and a showdown with former U.S. President Barack Obama over the Iran nuclear deal.
Now, as attorney general, Mandelblit must decide whether his political patron should be indicted on corruption charges stemming from allegations he took champagne and cigars from billionaires and considered trading political favors for better media coverage. It’s a tough predicament for a Netanyahu loyalist who could go down in history as the man who toppled Israel’s longest-serving prime minister since founding father David Ben-Gurion.
“It’s very hard to work with someone so closely for years and know that your decision could destroy his political, as well as his real, life,” said Yoaz Hendel, one of Netanyahu’s former media advisers. Netanyahu denies all wrongdoing in the cases against him.
Leftist Cabal
In making this damned-if-you-do, damned-if-you-don’t choice, Mandelblit finds himself in a similar bind as U.S. Attorney General Jeff Sessions, whose office is investigating allegations of Russian interference in the election that brought to power the man who appointed him: Donald Trump. (Sessions, in contrast to Mandelblit, has recused himself in the case.)
Mandelblit will be taking his decision in a political climate in which Netanyahu’s camp has grown increasingly distrustful of institutions such as the military, prosecutors and the Supreme Court, seeing them as trying to subvert the will of a right-wing majority.
Netanyahu and his supporters appear to have taken a page out of Trump’s book, painting the investigations and their coverage as a political witch hunt fueled by leftists and journalists spreading “fake news” to topple a conservative government. In a defiant speech Wednesday to thousands of supporters, the embattled leader accused his adversaries of seeking his downfall in order to cede territory to the Palestinians, and vowed not to let that happen.
Though the last several Israeli prime ministers have all been investigated — and Netanyahu’s predecessor, Ehud Olmert, was jailed for bribery after he stepped down — charges have never been brought against a sitting Israeli leader. Now, the crowds that have gathered outside Mandelblit’s house in Petah Tikvah every Saturday night for the past nine months are demanding indictments. They accuse the attorney general, who grew up in a Likud home, of dragging his feet to protect his boss.
Political considerations must not be allowed to intrude on his decision, said Tomer Naor, head of litigation at the Movement for Quality Government, which petitioned the Supreme Court to block Mandelblit’s appointment because he was the only candidate.
“It’s a role that needs to be clean from politics and from the perception that it’s somehow influenced by other considerations beyond justice,” he said.
State’s Witness
After months of questioning witnesses, police investigators took a leap forward in early August when they persuaded Netanyahu’s former chief of staff, Ari Harow, to sign a plea bargain allowing them to use his testimony against his onetime boss.
Before joining Netanyahu’s coterie, Mandelbit was the military’s advocate-general, a role carrying the rank of general in which he sought to reconcile Israel’s occupation of the West Bank and Gaza Strip with international law. He was also chief military judge for Gaza and the Southern Command.
Admirers call him an ethical and professional civil servant who hasn’t hesitated to challenge Netanyahu in the past. Most prominently, he’s broken with the prime minister over a law allowing Israel to annex private Palestinian land, saying he wouldn’t defend it against a challenge in the Supreme Court.
Ayelet Shaked, Israel’s justice minister and Mandelblit’s direct superior, defended the attorney general as a man of integrity who won’t hesitate to do the right thing.
“He’s a straight-shooting man who works in accordance with the truth and with the law,” she said in a phone interview. “If he thinks the prime minister broke the law, he won’t hesitate to act accordingly, even though he worked for him. If he sees that there isn’t enough evidence to press charges, he won’t feel he must do so just because of public pressure.”
Hiding Truth
With the investigations already dragging on for months, detractors want action. Former Prime Minister Ehud Barak, a Netanyahu foe weighing a political comeback, has asked why Mandelblit hasn’t sought to question former U.S. Secretary of State John Kerry or former U.S. Ambassador Daniel Shapiro on allegations Netanyahu asked them to help obtain a U.S. visa for Arnon Milchan. According to Israeli media reports, the Israeli-born Hollywood producer is suspected of plying Netanyahu and his wife, Sara, with cigars and pink champagne worth thousands of dollars.
“The attorney general is keeping investigators from finding the truth,” Barak tweeted.
Shaked noted that past investigations of public figures also took many years, and estimated the Netanyahu probes could take another year at least.
If Mandelblit does decide to indict Netanyahu, the prime minister can remain in office, resist the inevitable pressure to resign and instruct his lawyers to try to run out the clock. Throughout the investigations, polls have shown Netanyahu remaining the politician seen best-suited to be prime minister.
“Netanyahu’s on death row, but that means he’s got time for lots of appeals,” said Mitchell Barak, another former Netanyahu aide and now a Jerusalem-based pollster. “This process can go on for years.”