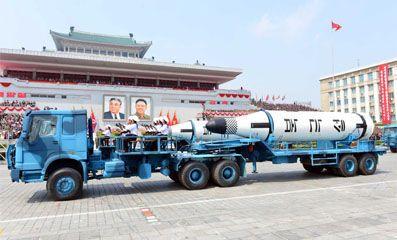 Walking a fine line of backing the tough talk directed at Pyongyang, but not wanting to raise the alarm at home, Central Intelligence Agency Director Mike Pompeo and National Security Adviser HR McMaster, in separate Sunday talk show appearances, said there was no indication war will break out.

“I’ve heard folks talking about that we’re on the cusp of a nuclear war,” Pompeo said on Fox News Sunday. “I’ve seen no intelligence that would indicate that we’re in that place today.”

Days after Trump said military options against North Korea were “locked and loaded,” General Joseph Dunford, chairman of the US Joint Chiefs of Staff, plans to meet with South Korean President Moon Jae-in on Monday.

Dunford will also meet with senior military officials along with Moon, according to an official with South Korea’s Blue House who asked not to be identified. He will head to China next on the previously scheduled visit, Yonhap News Agency reported, citing an unidentified military official.

The visit comes as fears grow that a war of words between Trump and North Korean leader Kim Jong-Un will create a miscalculation that sparks an actual military conflict. In a call with Trump on Saturday in Asia, Chinese President Xi Jinping called for all sides to maintain restraint and avoid inflammatory comments.

The US Pacific Command referred all questions on Dunford’s schedule to the Joint Chiefs of Staff. Nobody at the office picked up the phone after regular working hours. A tweet from the joint chiefs on Sunday showed him arriving at Yokota Air Base in Japan.

The US hasn’t taken any public steps to prepare for hostilities, including evacuating Americans from Seoul, which is within range of North Korean artillery, or moving ships, aircraft or troops into position for an imminent response. The US has about 28,500 troops stationed in South Korea.

Following Trump’s vow to unleash “fire and fury” on North Korea, Kim’s regime threatened to fire four Hwasong-12 missiles over Japan into waters near Guam, home to US military bases in the region. The US and its allies warned Kim against such a move, and Japan deployed four Patriot missile interceptors into the western part of the country.

Trump “made clear that the United States will not tolerate our citizens or our allies being threatened by this rogue regime,” McMaster said. “Our response is we are prepared militarily to deal with this if necessary.”

Pompeo said Trump’s comments were designed to send an unambiguous message to the country that it needs to disarm its nuclear weapons and that the US won’t tolerate a first strike. When asked whether he was confident Kim would heed that message, he said: “It’s a very difficult situation in North Korea.”

Some former military and intelligence officials questioned whether the harsh rhetoric from the Trump administration is the right approach.

Retired Admiral Mike Mullen, who served as chairman of the Joint Chiefs of Staff under Democrat and Republican presidents, said on NBC’s Meet the Press that Trump’s rhetoric “eliminates manoeuvre space” in how the US might respond to North Korea.

“I’m really concerned because I don’t know where this goes in terms of a peaceful solution,” Mullen said. Still, he said that Kim knows if North Korea were ever to use nuclear weapons, “that basically is an act of suicide from him, because we would eliminate him and his regime immediately.”

James Clapper, director of national intelligence under president Barack Obama, said “we don’t understand exactly what the decision-making mechanisms are, processes, surrounding Kim Jong-un in North Korea or what would set him off.”

“That’s why I think many people, myself included, would argue for more temperate language than the fire and fury,” he said on CNN’s State of the Union.

“That is their ticket to survival, and I don’t see any way that they’re going to give it up,” he said. “Our thought process here ought to be on accepting it and trying to cap it or control it.”

Some analysts expect further escalation in the coming days as both North and South Korea celebrate the August 15 anniversary of the end of Japan’s occupation of the Korean peninsula, and the latter conducts joint military exercises with the US from August 21. Japan is also holding annual military drills with the US over the next few weeks.

North Korea’s state-run media on Sunday condemned the planned military drills and said the US is “letting out dangerous war rhetoric.” The North’s Korean Central News Agency added that Trump’s “wild remarks” are causing concern and anger in South Korea.

Moon’s administration has pushed to start talks with North Korea even while looking to strengthen its defences after North Korea test-fired two intercontinental ballistic missiles in July. On Sunday, Deputy Unification Minister Chun Haesung said South Korea was seeking to ease tensions and the door for dialogue with North Korea was still open.

Recent comments from Trump have raised concerns that the US would be willing to accept collateral damage among its Asian allies.

Dunford said last month that it was “unimaginable” to allow North Korea to develop the capability to strike a US city with a nuclear weapon. Republican Senator Lindsey Graham told NBC News this month that Trump had told him that “if thousands die, they’re going to die over there”.