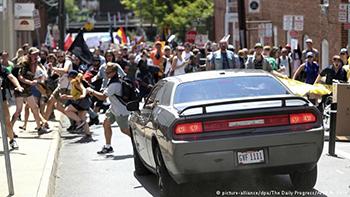 The white supremacist march at the University of Virgina is an affront to democracy in the United States, says DW’s Jefferson Chase. In his view, it shows the true ugly face of the bigoted Trump minority in the US.
I did my doctorate at the University of Virginia and used to sit reading books where on Friday people with torches held a KKK-style rally, replete with racist and Nazi slogans. In case you have a short memory, this is what I’m talking about.

These scenes took place on the central campus quadrangle that people at UVA, with charming Southern understatement, simply call The Lawn. The building in the background is the Rotunda, designed by Thomas Jefferson – the university founder, principal author of the Declaration of Independence and third president of the United States.
“Mister Jefferson,” as folks in Charlottesville still call the patron of the university and their city, was a complex figure. He was a slave owner who thought that slavery was a temporarily necessary moral evil. Yet he still wrote the words: “All men are created equal.”
So it particularly turned my stomach to see Jefferson’s university and ideas verbally defecated upon by people of no moral or intellectual complexity whatever, by fanatics whose only outlet for an aggression they don’t even understand is hatred of those who seem different. Anyone else feel reminded of 9/11?
“We in America do not have government by the majority,” Jefferson once wrote. “We have government by the majority who participate.” Except that America doesn’t have that right now. The events in Charlottesville this weekend are another example of the right wing’s desire to overrule the wishes of the majority.
What motivated people from outside Charlottesville to descend upon a college town to defend democracy by carrying Nazi flags and, at least in one case it seems, by driving a car into a crowd of counter-demonstrators and killing a woman?
Answer: The decision by the democratically elected government of Charlottesville, supported by the vast majority of residents, to remove a statue of Confederate general Robert E. Lee. The real message of Unite the Right, despite all the bellowing, is not: “You will not replace us.” It’s: “We want to replace the majority.”
How did America sink this low? You don’t need a PhD from UVA, or anywhere else for that matter, to answer that question. For seven months, a president elected against the will of the majority who participated has laid out a model for a new, dumber, more bigoted America in regular 140-character discharges of bilious nonsense. The Donald has shown the dimwits how it’s done – on a daily basis.
And speaking of alliteration, it’s no surprise that this president, otherwise so quick with “locked and loaded” or “fire and fury” threats, has been so lame, indeed flaccid, in his response to the white supremacists. The people who think up his sound bites know better than to challenge the racist right that put Trump over the top in the Electoral College. And that emboldens the stupid. Trump has indeed made America hate again.
“If a nation expects to be ignorant and free, in a state of civilization, it expects what never was and never will be,” Jefferson wrote. Or to put the matter into terms Trump is more likely to understand: You own the Nazi flags and thugs beating people with nightsticks, Mr. President. These are your people. As white supremacist David Duke said in Charlottesville, “We are going to fulfill the promises of Donald Trump.”
Sad, so sad. Even self-proclaimed staunch conservatives like Paul Ryan and Orrin Hatch have rightly criticized Trump for his response to Charlottesville and explicitly condemned right-wing extremism.
But words are one thing. Deeds are another. “Action will define and delineate you,” as Jefferson once said. So here’s the question to Representative Ryan, Senator Hatch and the rest of the Republican members of Congress: What action are you going to take in future? Are you going to stick up for America’s democratic traditions and fight its enemies or are you going to cravenly serve your new master?
“If God is just, I tremble for my country,” Jefferson once confessed. It was hard for me not to think of those words by my namesake as I watched police officers not intervening in street brawls a stone’s throw from one of America’s most venerable universities and a place close to my heart.
By contrast, I admired the counterprotesters, Charlottesville mayor Michael Signer and Virginia governor Terry McAuliffe for opposing the march of the would-be members of the master race.
It’s time for everyone who gives a tinker’s damn about America to follow their example. As things stand now, Mister Jefferson is rolling over in his grave.