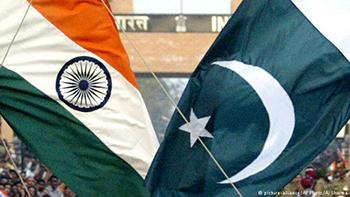 India and Pakistan became independent from British rule in 1947, yet they are still belligerent neighbors locked in territorial disputes and deep mistrust. The scar of partition remains unhealed, says DW’s Shamil Shams.

It was a violent partition. Around 1 million people died as a result of it, and millions more were uprooted and displaced. The Indian subcontinent, which was home to people of different faiths, was divided and maimed. A nation was forced out of it on the basis of religion, of otherness and mistrust. It was named Pakistan. The birth pangs, the mayhem, the physical and emotional suffering never left the former British colony. As India and Pakistan celebrate the 70th anniversary of their independence from British rule, the idea of division and separation remains as stark as it was on the midnight of August 14-15, 1947.
The first few months after the partition set the tone for the future of Indian-Pakistani relations. The two states became embroiled in a territorial conflict over the Kashmir region, with Pakistan’s founder Muhammad Ali Jinnah’s aides sending a batch of tribal warriors to “liberate” Kashmir from the rule of a Hindu maharaja. As a result, India dispatched its troops to the area, occupying most of the land, while Pakistan took control of the rest. Both countries have fought three wars over Kashmir, and the conflict continues to be the biggest impediment to cordial bilateral ties. With Pakistan’s support of Islamic separatists, the once secular and indigenous dispute has been transformed into a battle fought along communal lines.
As early as 1948, the two nations sought to outdo each other’s influence in Afghanistan, a region that British rulers could never win over. Pakistan feared that a pro-India government in Afghanistan could pose a threat to its existence, with many ethnic Pashtuns also unhappy with Jinnah’s authority and seeking unity with Afghanistan – also a Pashtun-majority area. That was the beginning of the Afghan conflict, which culminated in the former Soviet Union’s invasion of Afghanistan. As New Delhi was closer to Russians, Pakistan offered its full support to the United States, plunging the region into a deadly civil war that continues to this day.
The initial foreign-policy decisions taken by both countries have had a deep impact on their domestic policies, too. The mistrust of each other has seeped into their official propaganda, their history books, their security apparatus and, more significantly, their psyche.
Another partition
When Bengalis living in the then eastern part of Pakistan (now Bangladesh) started demanding their rights and autonomy, the first reaction of the authorities in then West Pakistan was to label them as “Indian agents.” The Muslim-majority East Pakistan’s close proximity to India, its historical links to Indian Bengal and cultural affinity with Bengali Hindus were major reasons behind this suspicion. The unnatural line of partition that was carved out of bloodshed in the western parts of British India was missing in the east. Ironically, the All-India Muslim League, which demanded a separate country for Indian Muslims, was founded in Bengal. But Jinnah’s idea of winning greater political and legal rights for the minority groups in India was severely betrayed by his successors in Pakistan. Pakistani rulers refused to accept the Bengalis’ demands and used force against them, which resulted in an independence movement in East Pakistan and the foundation of Bangladesh in 1971.
It was the second partition in a span of 24 years – another violent partition that claimed the lives of millions of Bengalis. Thousands of Bengali women were raped, intellectuals tortured and houses burnt. Islamabad has never apologized to Bangladesh over the 1971 massacre and officially “justifies” the conflict by accusing India of conspiring to disintegrate Pakistan.
The second partition was also a result of a mutual fear of each other. The “enemy” discourse that was set into motion by Jinnah and leaders of the Indian National Congress in 1947 perpetuated itself in 1971, consolidating hatred.
Amnesia about partition
Most problems that India and Pakistan face today are rooted in the 1947 partition. Any scholarly study in post-colonial theory would point to similar issues in other parts of the world as well, be it the Middle East, Latin America or Africa. In India, there is still talk about partition and its effects, but there is an absolute silence over it in Pakistan, even though discussing partition would be an essential step toward solving the issue of political and economic governance in Pakistan.
The “elite capture” of the state in 1947, with the British-backed land-owning class seizing the newly independent country’s resources and its governance, remains intact, as well as the persecution of religious minorities that was a result of the so-called “two-nations theory” on which Pakistan was founded. We also need to revisit the Indian partition to understand why Islamist extremism has swept across Pakistan or why the state chose to use Islam as a foreign and security policy tool. Today, when Indian Prime Minister Narendra Modi is bent on reviving Hindutva, a Hindu supremacist ideology, we need to go back to the 1947 partition to trace its roots.
India and Pakistan celebrate the 70th anniversary of partition with nationalistic fervor, but there is nothing much to celebrate for the people of the two countries. While both nations boast of having nuclear weapons, advanced militaries and defense systems, the majority of Indians and Pakistanis do not have access to basic facilities. Yet the warmongering on both sides continues, witha falsified history about India’s partition is being fed to the subcontinent’s denizens – stories of fake glories and false supremacies.
It is not the 70th anniversary of independence; it is the 70th anniversary of animosity. The partition cannot be undone, but the wall of hatred can be brought down. Let’s bring down this wall!