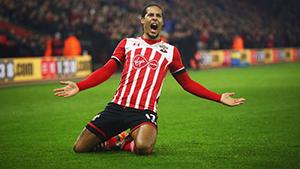 A round-up of the latest football gossip from Monday’s national newspapers.

Tottenham are ready to step up their interest in Lazio forward Keita Balde.

Newcastle have made a fresh approach for Arsenal pair Jack Wilshere and Lucas Perez.

Leicester will turn down a £31.8m bid for Riyad Mahrez from Roma, despite an ultimatum from the Italian club.

Chelsea have been rocked by a demand for a loyalty bonus from Diego Costa.

Jamie Vardy blew his top in the tunnel after Leicester lost their seven-goal thriller at Arsenal and punched a tunnel wall.

Diego Costa has said Chelsea have treated him like a ‘criminal’ and he could see out contract in Brazil.

Watford are turning their transfer focus to English players after debuts for Andre Gray and Will Hughes.

Antonio Conte’s job could be at risk if Chelsea do not make more signings, says Chris Sutton.

Manchester City are facing a stand-off with Fabian Delph as he demands a loan exit.

Tottenham are preparing a £28m bid for Davinson Sanchez after the Ajax star told the club he wants to leave.
THE SUN

Newcastle have stepped up their interest in Arsenal outcast Jack Wilshere.

Chelsea got what they deserved with the Burnley defeat, says Alan Shearer.
DAILY TELEGRAPH

Wayne Rooney has promised to keep on improving after his debut Everton goal.