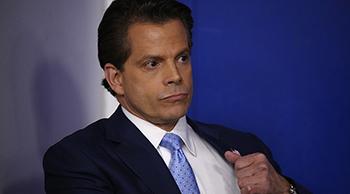 The Mooch has emerged from the ashes of his short-lived White House career to claim there is an establishment effort to eject Trump from the White House, and that the president should have been “much harsher” on white supremacists in Charlottesville.
“I think there are elements inside of Washington, also inclusive of the White House, that are not necessarily abetting the president’s interests or his agenda,” Scaramucci told ABC’s George Stephanopoulos in his first appearance since he was fired from his role after only 10 days.

“For whatever reason, people have made the decision that they want to eject him. It’s almost like he has opened up the door for America’s CEOs and America’s billionaires to enter Washington’s political system,” the former Wall Street executive explained. “The members of that political class do not like that.”
Scaramucci also referred to a “Bannon-bart” influence within the White House that is “nonsensical” and impeding the president’s progress, referring to strategist and former Breitbart head Steve Bannon.
He predicted there will be further staff changes within the administration, explaining he thinks Trump is “getting his arms around the fact that if he wants to prosecute his agenda he’s got to bring in loyalists to him, and he’s got to bring in, I think, a different strategy.”
“He’s done a tremendous amount I think he’s done way better in terms of progress as president that’s been prominently displayed.” he added.
Scaramucci said he wouldn’t have recommended the statement Trump gave on the attack in Charlottesville on Saturday, saying that it should have been “much harder” on the white supremacists involved. He commended national security advisor General HR McMaster for calling out the car-ramming that killed one and injured 19 terrorism.
Trump has been criticized for condemning the violence on “many sides,” instead of referencing the white supremacist violence.
“With the moral authority of the president, you have to call that out,” Scaramucci said.
Scaramucci made his feelings for Bannon clear during his short-lived communications chief role, when he told a New Yorker reporter he wasn’t “trying to suck my own c*ck,” like Bannon. “I’m not trying to build my own brand off the f**king strength of the president..”
He told Stephanopoulos, “I think the president knows what he’s going to do with Steve Bannon,” adding Trump has “a very good idea of who the leakers are” in the White House, as well as those who are “undermining his agenda.”
Bannon has been accused of using the right-wing Breitbart to attack McMaster through negative leaks. The national security advisor has appeared in an array of negative stories on the website.