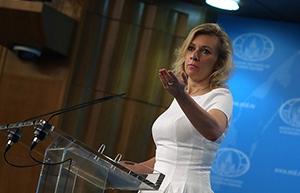 “How far the situation has gone… Well, it has come very close to a potential possibility of a force conflict,” she said in an interview with the evening news roundup on the Rossiya-1 television channel.
“If the force scenario is really used and if the situation really develops in a way the Washington establishment is threatening with, it will be a real catastrophe,” she said.
According to Zakharova, the United States seems not to understand consequences of a potential force conflict which will “affect all countries of the region, and not only them.”
“Representatives of the establishment, Congressmen are reassuring people saying they should not worry about that as it will not kill people in the US, it will kill people in other countries, implying not only North Korea. I think they mean South Korea as well,” she noted.
These week, Washington and Pyongyang have been exchanging sharp statements. On Tuesday, US President Donald Trump told reporters that North Korea should stop threatening the United States, otherwise Washington will answer with “fire and fury the likes of which the world has never seen.” North Korea’s Central News Agency (KCNA) later reported that Pyongyang was “carefully examining” plans for a missile strike on the Andersen Air Force Base located on the US Pacific territory of Guam.