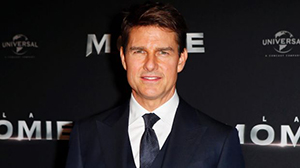 Footage of the stunt, in which the 55-year-old actor takes a running jump between two building rooftops, has leaked online.

The jump falls short, however, and Cruise can be seen slamming into the side of the target building instead of landing on it.

The incident occurred during filming in London this week.

Cruise is connected to wires at the time, so there was likely no real risk of a fall during the stunt.

In the footage, the impact looks serious and, once delivered by wire to the roof, Cruise limps away, unsteady on his feet.

The footage was leaked to the tabloid news website TMZ.

While the footage is presumed to be shot by a third party, it is also possible it has been deliberately leaked as a marketing stunt for the film.

Neither Cruise’s personal representatives, nor Paramount, the studio behind the film, have commented on the footage.

The film is the sixth in the Mission: Impossible franchise, directed by Christopher McQuarrie.

Based on the television series of the same name, the Mission: Impossible film franchise has pulled a cumulative box office total of around US$2.7 billion since its launch in 1996.

Production commenced on the film in Paris in April; aside from London, other filming locations include New Zealand, India and Norway.

The production moves to New Zealand later this month; it moves to Norway before September.