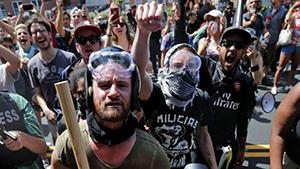 By Brenna Cammeron BBC News
The violence and murder of a protester in Charlottesville, Virginia, over the weekend has been attributed to far-right elements that descended on the city to demonstrate against the proposed removal of a statue of Confederate war hero Robert E Lee.

President Donald Trump drew widespread criticism on Saturday when he said that there was violence on “many sides” in Charlottesville and initially neglected to explicitly censure the white supremacists who organised the rally.
On Monday, he bowed to pressure to castigate the KKK, white supremacists and neo-nazis.
But many conservatives say blame should be shared by Antifa, a loosely affiliated group of far-left protesters.
Critics argue the media tends to excuse violence by Antifa militants just because they are fighting white supremacists and their odious ideology.
What exactly is Antifa?
The social causes of Antifa (short for anti-fascist or Anti-Fascist action) are easily identifiable as left-leaning.
Most members oppose all forms of racism and sexism, and strongly oppose what they see as the nationalist, anti-immigration and anti-Muslim policies that Mr Trump has enacted.
However, as their name indicates, Antifa focuses more on fighting far-right ideology than encouraging pro-left policy.
Unlike the mainstream left, they do not seek to gain power through traditional channels – winning elections and passing bills into law.
Antifa is anti-government and anti-capitalist, and their methodologies are often perceived as more closely aligned with anarchists than the mainstream left.
Antifa does not shy away from militant protest methods, including the destruction of property and sometimes physical violence.
They were present at the 2017 Berkeley protests of far-right speaker Milo Yiannopoulos and at violent protests against Donald Trump’s inauguration; they were also present at Charlottesville.
Antifa’s roots go back almost as far as Nazis
Much like the far-right, Antifa members around the world comprise a patchwork of groups, though the most active appear to be based in the US, the UK (under the name Anti-Fascist Action) and Germany (Antifaschistische Aktion).
The German movement was founded in 1932 to provide a militant far-left group to counter the fast-rising Nazi party.
They were disbanded in 1933 after Hitler took control of parliament and resurrected in the 1980s as a response to neo-Nazism after the fall of the Berlin Wall.
President Trump’s election seems to have been something of a touchstone for the Antifa movement, which has links with the Black Lives Matter (BLM) movement and various anarchist groups.
According to James Anderson, one of a group of people who run the popular anti-fascist and anarchist news site, It’s Going Down, interest has spiked since Mr Trump’s election.
The It’s Going Down website, which received around 300 hits daily in 2015, now garners between 10-20,000 hits a day.
Since the events in Charlottesville on Saturday, the It’s Going Down Twitter handle has gained 2,000 new followers.
While interest may have spiked since Mr Trump’s election, it is all but impossible to quantify how many people are active members of Antifa.
Much like the far-right, chapters of Antifa are loosely connected and highly secretive, and organise mostly on message boards such as Reddit and over social networks like Twitter and Facebook.
Calls to label Antifa a terror organisation
Antifa has become a popular topic for right-leaning websites and among conservative pundits.
Fox News commentator and conservative speaker Erick Erickson says in The Resurgent, a conservative blog, that “Antifa and the white supremacists are two sides of a common coin. The people dead in Charlottesville died because of one neo-Nazi, but there were dozen [sic] of people left bleeding in the streets because of Antifa”.
Meanwhile, a change.org petition lobbying Mr Trump to declare Antifa a domestic terror organisation has garnered nearly 100,000 supporters.
While Antifa has gained relatively little attention in the mainstream media, that may soon change.
According to Mr Anderson, the events in Charlottesville over the weekend represent a “sea change” in how Antifa is perceived.
“This is a huge turning point and vindication for our movement,” he said.
“We are working with Black Lives Matter, local clergy, this is not a movement that wants to be a lone group of militants,” he said.
“This is about popular power. Sometimes that looks controversial – but this is a broad movement, and we are looking to engage a wide variety of people.”