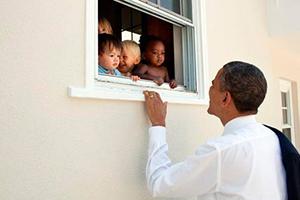 Barack Obama’s message of unity after a far-right, white supremacist event in Virginia descended into deadly violence has become the third most ‘liked’ tweet in history – and prompted renewed pining for the former president.

“For love comes more naturally to the human heart than its opposite.”

His comments have also been shared more than one million times, with many people mourning the fact that he is no longer leader of the free world.

One wrote: “We miss you. We are in hell. We didn’t vote for this monster! Please please help us. I know you’re respecting the office but the fate of the world – the world you live in too – is at stake!”

“No one is born hating another person because of the color of his skin or his background or his religion…” pic.twitter.com/InZ58zkoAm
— Barack Obama (@BarackObama) August 13, 2017

“God bless you President Obama! Your legacy can never be erased because no trump or party can remove love & respect from hearts of people,” a third lamented.

President Donald Trump on the other hand, has been criticised for not condemning white supremacists as the source of the troubles in Charlottesville.

“…For love comes more naturally to the human heart than its opposite.” – Nelson Mandela
— Barack Obama (@BarackObama) August 13, 2017

In a press conference, he offered condolences to the family of 32-year-old Heather Heter, who was killed when a suspected Neo-Nazi ploughed his car into peaceful demonstrators.

“We must love each other, respect each other and cherish our history and our future together.”