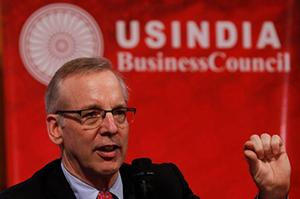 WASHINGTON/NEW YORK (Reuters) – One of the Federal Reserve’s most influential members expects to raise interest rates once more this year, and to soon begin shedding some of the Fed’s bond holdings, according to comments on Monday that pushed back on doubts in financial markets.

In an interview with the Associated Press, New York Fed President William Dudley, a close ally of Fed Chair Janet Yellen, also praised the Trump administration for not “politicizing” the U.S. central bank’s decisions as some members of Congress have done in recent years.

His steady-as-she-goes comments on inflation and rates appeared to respond to growing skepticism in financial markets that the Fed will raise rates by December, and they prompted a rise in the dollar and in bond yields.

“It depends on how the economic forecast evolves,” Dudley told the AP. “If it evolves in line with my expectations … I would be in favor of doing another rate hike later this year.”

The Fed has raised rates twice this year and aims, according to forecasts, to hike once more. However a slide in inflation readings in recent months to 1.5 percent, below a 2-percent Fed target, has raised doubts among investors who give about a 40 percent chance of the Fed following through.

More certain is the Fed’s well-telegraphed plan to announce the start date for beginning to shed some of the bonds in its $4.5-trillion portfolio, most of which it amassed to spur the economy in the wake of the 2007-2009 crisis.

“I don’t think the expectations of market participants are unreasonable,” Dudley, who has a permanent vote on Fed policy, said when asked whether predictions were accurate for the plan to be announced at a mid-September meeting. He predicted the portfolio would shrink to between $2.5 and $3.5 trillion after five years.

Investors and economists generally expect the Fed next month to announce that bonds will begin to run off around October 1. That is the month that the Treasury is expected to fully exhaust its remaining borrowing capacity in what is known as the “debt ceiling.”

This does “not really” pose difficulties for the Fed because the debt it holds counts against the limit, and it could choose to “delay the actual start date” of reducing the portfolio, Dudley said.

Elsewhere in Washington, speculation has heated up over who President Donald Trump would pick as Fed chair, with the president himself saying his economic advisor Gary Cohn as well as Yellen, whose term expires in February, are contenders. Fed officials and congressional Democrats have worried that that and other vacancies would leave the door open for Republicans to trim the Fed’s historic independence from politics.

Asked about Cohn, Dudley said he is a “reasonable candidate … who knows a lot about financial markets.” Both men are Goldman Sachs alumni: Cohn a president at the Wall Street bank and Dudley a partner.