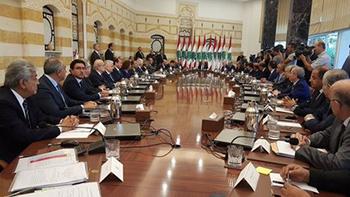 An economic dialogue meeting to discuss the wage scale law and the taxes to fund it began at the Presidential Palace in Baabda on Monday.

President Michel Aoun has invited several parties to discuss the various points of dispute and disagreement over the recently approved salary scale bill and the new batch of taxes to fund said scale.

“We will address together a number of complications that arose after the endorsement of the wage scale. We will collect your ideas and study them in detail in order take the appropriate decision as for both laws,” said Aoun at the beginning of the session.

He added: “There are many righteous demands which we will respect. We seek to modify some mistakes made in the wage scale, but you have to know that potentials limited and the economic situation is critical, not to mention the deficit in trade. The matter must be addressed responsibly.”

“We are ready to listen to you openly and to establish a real dialogue that highlights the common issues between the parties concerned,” stated Aoun.

For his part, Prime Minister Saad Hariri stressed commitment to the wage scale saying “it is a first” that the recently approved scale has “introduced reforms and new taxes.”

The dialogue meeting was attended by Hariri, concerned ministers, Central Bank Governor, and representatives of the economic, labor and financial institutions, as well as free professions, private schools and teachers Syndicates’ heads.

Before the meeting began, Aoun and Hariri discussed the general situation in the country.